This September, Hope For The Warriors is proud to announce Shelli Fussell as our volunteer of the month. Please join us in a virtual round of applause as we celebrate all Shelli has done for our organization!

Since 2016, Shelli has worked at River Landing in Wallace, NC, where she has been instrumental in organizing the annual Hope For The Warriors Celebrity Invitational.

This year’s 13th Annual Invitational took place from August 27-29. It was here that HOPE staff, supporters, and many of our nation’s heroes came together to make an impact in the lives of the military community. The Invitational featured the HOPE & Courage Awards along with a special musical performance by country star Craig Morgan. Shelli organized and booked all the accommodations at River Landing for the guests, sponsors, honorees, HOPE staff, and celebrities. Her dedication and commitment to our organization is part of what makes this event successful year after year! 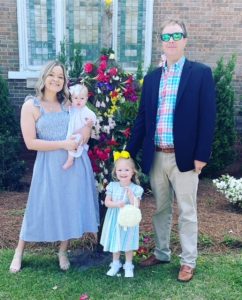 “The work I do with HOPE means so much to me because I know I am helping put on an event that helps such a great organization, and that in itself is very rewarding to me,” said Shelli.

Supporting the brave men women that serve our country is something that Shelli takes pride in doing. Her uncle currently serves as a Chief Warrant Officer in the Navy, so she sees first-hand the sacrifices that come with taking the oath to protect and defend our freedoms.

Danielle Rose, HOPE’s National Donor Events Manager, was one of the many staff members who nominated Shelli for this honor as our team is beyond thankful for the role she plays in the Invitational planning process.

“Shelli’s patience with Hope For The Warriors is unlike any other! Our group for the Invitational maxes out the entire Inn at River Landing, as well as all other available clubhouse suites and home rentals. While balancing these reservations might be a part of her standard job, this year, Shelli went above and beyond her position to accommodate our crowd. She made herself readily available throughout the entire planning process and over the course of the event — even on nights and weekends. She handled the MANY changes and atypical requests with ease and always made the HOPE team feel reassured,” said Danielle.

Thank you, Shelli, for continuing to show up for our service members, veterans, and their families! It is because of the support you, and the entire River Landing team, show our organization that we can continue to fulfill our mission of meeting the changing needs of the military community.

“HOPE is such a great group to work with, and I enjoy getting to know all of the people associated with the tournament each year,” said Shelli. “It is just so rewarding to give back to such a great cause.”