Wyatt Larkin tends to downplay his role as a volunteer with Hope For The Warriors. Instead, he would rather talk about how volunteering for HOPE has positively impacted his life.

While Hope For The Warriors understands and appreciates Larkin’s selfless demeanor they still wanted to honor the Fort Wayne, Indiana resident by awarding him Volunteer of the Month honors for September.

The 26-year-old Larkin has been supporting HOPE since 2011 when he was just 14 years old. Already a competitive junior golfer, Larkin made a donation to HOPE for every birdie he made during the competition that year.

He’s pretty good at golf, too. When he graduated from high school, he was one of the top 50 players in the 2014 Division I recruiting class. He went on to star at Kennesaw State University where he had 10 top-10 finishes and a tournament win as a senior. 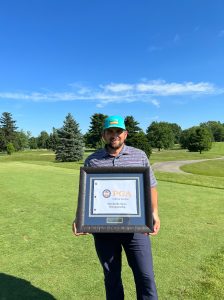 Since then, Larkin has used the game he loves to aid his continued support of HOPE. He’s involved in the Hope For The Warriors Celebrity Invitational every year and this year began his own tournament to benefit HOPE, Hoosiers For Hope. The first-year event was a huge success right out of the gate, raising over $30,000.

He’s listed as a celebrity in the Invitational each year based on his outstanding college career. That’s something else he also downplays.

“I’m honored by that (celebrity listing), but I am nowhere as accomplished as the other celebrities invited to the event,” he said. “Since supporting HOPE for the last 10-plus years, I look at the opportunity of playing as a way to be an ambassador of HOPE. I try to create connections and relationships that will continue to support the cause.”

HOPE regards Larkin in high esteem, as one of the many, many key cogs in a wheel that keeps turning to help move its mission forward.

“At Wyatt’s recent event (Hoosiers For Hope) we had two service members who were personally struggling with their own demons,” said Erin Thompson, HOPE’s mission ambassador, and event officer. “During this event, they were able to connect, and they both realized they aren’t alone in this internal fight. What they are going through is normal and HOPE is there to help them find their way.”

“Because of Wyatt and his dedication to HOPE, he has made an everlasting impact on not only their lives but many others.”