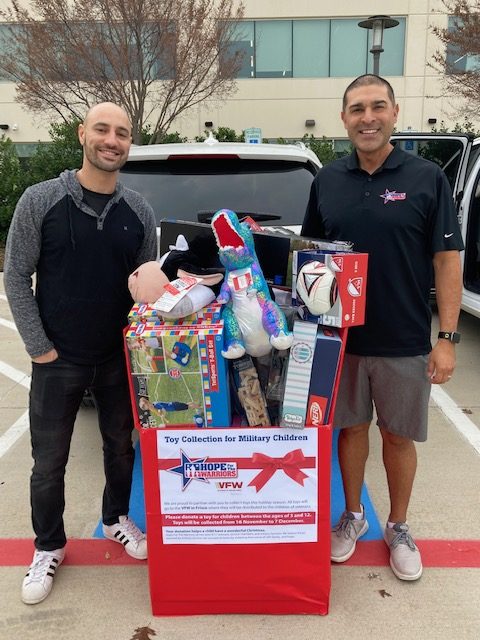 Navid McGee exudes the true meaning of holiday spirit and Hope For The Warriors. A year ago, McGee had never heard of HOPE, but now he has been named volunteer of the month of December for the organization, all because of that spirit of giving back.

The Dallas resident had a chance meeting with Mario Alcala, HOPE’s military and veteran program manager for Texas earlier this year. Not long after that Alcala, a retired U.S. Marine sergeant, invited McGee to play in a golf outing. The pair formed a bond over four hours of golf and conversation.

The two stayed in touch, and in the process, McGee learned more about HOPE, its mission, and its success in reaching veterans and their families. McGee had been considering starting a Christmas toy drive and he figured HOPE would be the perfect partner and recipient of the toys collected.

“I felt HOPE would be a great fit for what I wanted to do. I have done toy drives in the past for Toys for Tots through other companies and I just felt the need to start something myself,” said McGee.

Though this was his first time working with HOPE, he’s no stranger to the military community. “My grandfather and father served in the Marines. My grandfather was a highly decorated Lieutenant Colonel, and my father was a Sargent. I also, graduated from Marine Military Academy in Harlingen, Texas. So, I have a lot of love for Marines. Oorah!”

McGee’s efforts brought new toys to HOPE, brightening the lives of many children. McGee’s passion to help made a lasting impression on Alcala. “The thing that jumps out to me the most is that Navid took the initiative and asked me if HOPE would be interested in doing a toy drive for Christmas,” said Alcala. “I had to get the request approved through my chain of command and the process took some time. However, Navid was persistent and asked every time I saw him if I had received an answer.”

Once the toy drive was greenlighted by HOPE, McGee spent many hours of his time dropping off collection boxes around Dallas, picking them up, sorting through the toys and dropping them off for delivery.

“I just felt the need to try and start something myself,” said McGee, who owns a moving company in Dallas. “We didn’t meet the goal I had in mind, but I truly believe that if even one gift made a child’s Christmas that much better, then it was worth it.”

“Hope For The Warriors made this toy drive so easy to be a part of. I truly look forward to working together with HOPE again in the future.”