The Definition of Resilience: A Gold Star Spouse’s Story 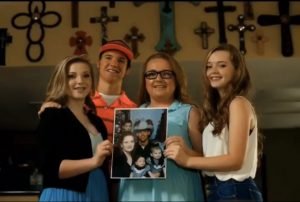 Resilience. It’s defined as the capacity to recover quickly from difficulties. And that’s an adequate definition.

Desty Rae Boatright. Or most any Gold Star spouse.

Consider Desty’s life in early December 2004. She and husband U.S. Army Sgt. Luke Boatright had the picture-perfect little family: two daughters and a son, all under the age of seven. Luke would be returning home from Iraq in a month. On December 4, 2004, a knock at the door shattered it all.  Two uniformed soldiers brought the news: Sgt. Boatright had been killed in action. 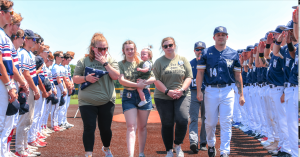 When she reflects on that day, that terribly awful day, she remembers thinking “My life is over. What? Why? How? How am I going to raise these kids alone? I just lost my best friend,” said Desty, who married Luke when she was 15 and pregnant. Luke was 16 years old.

Then she got up, dusted herself off and did what Gold Star spouses have always strived to do … her best to get on with life.

“I was a military widow at the age of 23. My world was shattered, and I knew I had to become the strongest person I ever knew I could be.”

Almost two decades later, after countless ballgames, sleepovers, late-night homework … all the travails of rearing three children as a single parent, Desty’s smile is bigger than ever.

“I have raised our children the best way I knew how. I never missed an opportunity to tell them I loved them.”

Desty figures she was born resilient; “…there must have been a little bit of resilience embedded in my soul.”

She also knows she didn’t have any other choice. It’s the natural reaction of a military spouse, especially Gold Star spouses, who are honored on Gold Star Mother’s and Family Day annually on the last Sunday in September, which is September 25 this year.

“I knew when I lost Luke and I was only 23, I had three babies that depended on me as much as I depended on them to keep me going.”

And that’s what they have done for almost 20 years … leaned on each other, supported each other in difficult times and laughed a lot in good times.

“I realized I was an empty nester and I thought, ‘what am I going to do.’ My baby Zoie is 21 and she said ‘you can’t live through us anymore, mom.’”

Later that day she found herself driving around Durant, Oklahoma, and she wound up passing the university in town, Southeastern Oklahoma State University. “I thought I’ll never get in there, I’m too old.”

A week later she had been accepted and was wondering “what do I do now?”

That resilience that was hiding in the background popped up again, and there she was in a college classroom with students half her age.

Later in that semester she went searching for scholarship funding to help cover the cost of books each semester. Her tuition is covered through Luke’s military benefits.

Hope For The Warriors popped up in her search. She discovered the nonprofit’s Military Spouse and Caregiver Scholarships, applied, and was awarded the Restoring Family Scholarship for $2,000 last January.

“(The scholarship) has been amazing. I don’t have to worry or panic about my books for the semester. It just takes off a bit of the strain of starting a new semester,” said Desty.

Last spring wasn’t overly kind to Desty. The week before spring break, a drunk driver ran a stop sign and slammed into the driver’s side of her car. She had to be airlifted to a hospital where she spent several days. Her daughter thankfully, escaped injury.

A week after getting out of the hospital, she was out for dinner, heard a tornado warning for her neighborhood and rushed home. By the time she got there, part of the roof had been ripped off her house and the inside was flooded. Her small barn had been lifted off its foundation and dropped, hitting her three dogs and killing them and her just-completed pink chicken coop was destroyed.

She says things are about back to normal at her little homestead, which includes ducks, chickens, dogs, horses, cows, and cats. She’s returned to school pursuing her dream of becoming a teacher.

“Over the years I just never let things get me down. I had to overcome the worst in my life and that was having to bury Luke and not understanding why. Trust me, there were days I wanted to give up, but for some reason I never have.”