Year In Pictures – The Big Catch 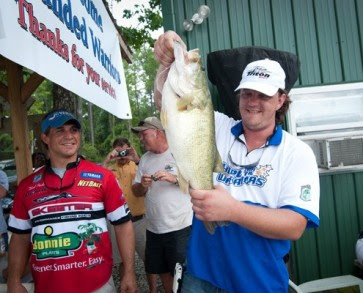 At the end of July, Hope For The Warriors was invited to join elite anglers for the Bassmaster Elite Series Toyota Tundra All-star week in Montgomery, Alabama.  This was the second year that we were a part of this event and this year, we invited six wounded service members and veterans to attend as part of our Outdoor Adventures Program.

The veteran in this photo had almost backed out of the trip.  The thought of coming on the trip, socializing with a lot of new people, and garnering attention from crowds was overwhelming to him.

On the second day, the guys were paired up with their anglers and went out on the bass boats.  As the tournament time was up and the boats were docked, each service member pulled out their largest catch.

Clearly, this photo depicts the winning catch of the day.  The bass weighed 8-pounds, 7-ounces and was by far, the largest bass caught that day.

But this veteran’s smile caught my attention.  Here he stands, relaxed and proud–exactly the way he should feel after a fun and theraputic day of fishing.  He was a completely different man than the person we had met less than 24 hours before.

Another great trip to Alabama!