Who is that Masked Man?

Meet Scott Sunday, member of Team Hope For The Warriors®.  Read about his experiences in the Run For The Warriors® held on May 18, 2013 in Jacksonville, NC. Read more about Scott’s adventures. 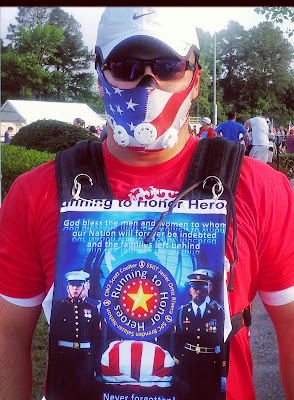 As Armed Forces Day 2013 approached, Emme, my wife, and I were heading to Jacksonville, NC to visit our friend, and Gold Star
Wife, Veronica. Having often celebrated Armed Forces Day hanging out with
friends, cooking out, going to the beach, or just relaxing; this year’s
celebration would take on an entirely different turn.  Rather than relaxing, this year’s celebration
was the culmination of several month of fundraising on behalf of Hope For The
Warriors®; a fundraiser that would have me running the Run For The Warriors®
Half Marathon in an elevation training mask and weighted vest.
If you find yourself asking why, you
would not be alone; that was a common theme during the fundraiser and training
leading up to the Run For The Warriors® event.
Simply put, I was wearing the vest in hopes that bearing a heavy load
would inspire donors to donate funds to allow warriors and their families to
bear a lighter load. I added weight proportional to the donations that were
received.  The mask has a symbolic
meaning as it restricted my oxygen intake making it difficult to breathe.  This is similar to the Gold Star family
members who struggle daily to take a breath without feeling the pain of their
fallen Hero. 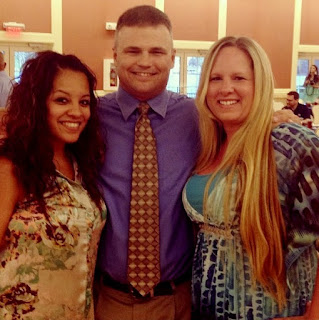 As we were driving to Jacksonville I
found myself abnormally nervous. I’ve already run a marathon in 29 states in my
quest to run a marathon in each state in honor of fallen friends and
heroes.  A half marathon certainly shouldn’t
make me overly nervous.  As we arrived in
Jacksonville it dawned on me that I was nervous because not only was I running
the race on Saturday but I was also one of the guest speakers at the Hope For
The Warriors® Pre-Race Dinner.  Arriving
at the dinner I was quickly welcomed into the Hope For The Warriors® family.  There were several speakers during the dinner
and I was humbled to be among them; sure enough, as soon as I finished my
speech and returned to my seat the nervous were gone.  That is until we made it to our hotel and I
started packing the gear for the morning’s run.
Friday night I thought about both
the daunting task ahead of me the next day.
I awoke early Saturday morning, grabbed the gear and Emme and I headed
to the high school for the race.  Upon
arrival we searched for Veronica, and another friend Rocio, who had agreed to
run the race with me to keep me company and ensure I was safe.  Quickly enough, the gun sounded to start and
we were off. 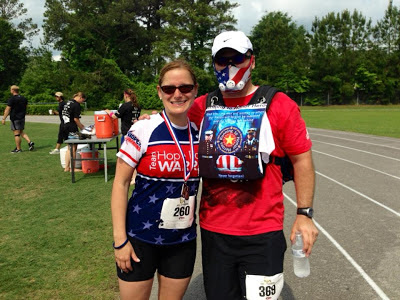 We started off at a steady pace,
even passing a few people during the first couple of miles.  But  I
quickly realized that the mask and vest were going to be more difficult than
I’d anticipated in the heat and humidity of the morning and I slowed the
pace.  As we arrived at the aid stations
the volunteers were incredibly pleasant, supportive and cheerful; truly a
welcome reprieve from the lonely asphalt that lie ahead.  At one of the aid stations a volunteer, not realizing
what I was wearing, asked; “Do you need all that to run?”  I got a good laugh out of that later when I
actually had the energy to laugh. 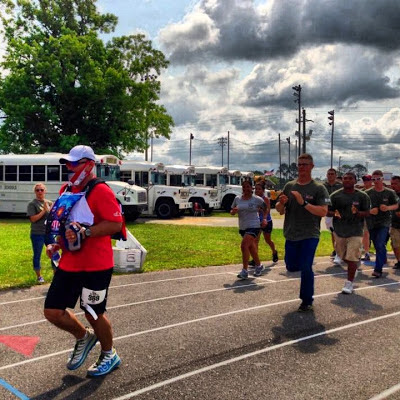 As we continued to plod along, and
the course grew emptier, I was truly grateful that Veronica and Rocio decided
to hang back with me despite my slowing them down.  Finally, after a couple of hours the high school
came back into view and we knew the end was in sight.  About half a mile from the finish we were met
by Robin Kelleher, President/CEO/Cofounder at Hope For The Warriors®, who joined
us for the final stretch.  As we entered
the stadium and approached the finish line, a group of volunteers started
cheering and fell in behind us; encouraging us across the finish line.  It was truly an emotional experience crossing
the line as it closed the first chapter in my fundraising efforts; I certainly
hope I represented the donors well during the run.
It was truly an honor to be a member
of Team Hope For The Warriors® and spend Armed Forces day running a
half-marathon wearing a 39-pound weighted vest and elevation training mask in
support of Hope For The Warriors
®. 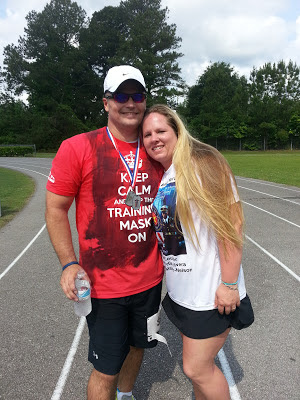 Find a Run For The Warriors® near you!
Donate Today
﻿
﻿
Facebook0Tweet0LinkedIn0Print0Email0