What is Your Mission? 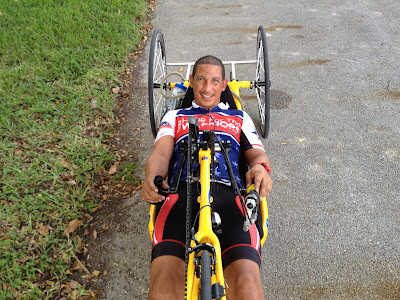 “When I got injured, my
mission changed.”

Those are the first words
spoken in the video that highlights Nathan Cruz, wounded Army Veteran and
member of Team Hope For The Warriors®.
It is a sentiment that many service members and veterans can understand.
Injuries have changed career
goals, future plans, hobbies and activities, family relationships and
more.  These changes are often
times unwanted and unwelcome.
Nathan however has utilized sports to bring positive changes.

The video does a great job
highlighting Nathan’s progress.  He
served ten years in the Army, six years in Special Operations.  He was first injured while deployed and
was sent back to the states.  Once
stateside, he was hit by a car.
Along with his physical injuries, he struggles with the invisible wounds
of PTSD.
Prior to his injuries,
Nathan enjoyed biking.
Post-injury, he assumed that those days were behind him and he sold his
bike. When he discovered handcycles, it gave him a great new focus.

Not only has handcycling
given him a great activity for his physical and emotional rehabilitation, it
has given him a new group of friends.
He handcycles regularly with two other wounded veterans.  They train together, they depend on
each other, they understand each other.
Nathan has already
completed a number of marathons and bike rides.  His list includes the ING Miami Marathon, West Palm Beach
Marathon, Melborne Music Marathon, and a marathon in Bogota Colombia.  He has
also completed two Soldier Rides (Boston and Tampa) and participated in the
Warrior Games in both 2011 and 2012.
His injuries changed his mission, but he has utilized handcycling to
make those changes positive. 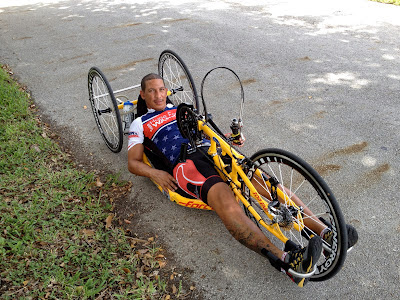 Next up for Nathan is the
Army 10-Miler in Washington D.C. in October.  As part of Team Hope For The Warriors®, Nathan and three
other Special Operations veterans will compete in the race, representing Team
Hope For The Warriors®.  Nathan
continues to demonstrate that his injuries have changed his mission, but that
new mission is a positive one.
Through his athletic events, Nathan is defined by his accomplishments,
not his injuries.
Hope For The Warriors® is
focused on our mission to restore self, family and hope to our wounded service
members and military families.
Team Hope For The Warriors® is one program that helps us accomplish our
mission.
YOU can support our
mission, Nathan’s mission, and others.
Join Team Hope For The Warriors® and raise funds to support combat
wounded service members and their families.  Join Nathan and the other Special Ops guys on our Team at
the Army Ten-Miler.  We still have
bibs left for this sold out race.
The fundraising requirement is low and easy to meet.
Nathan has a mission.  How about you?
Learn more about joining the Team!
FacebookTweetLinkedInPrintEmail