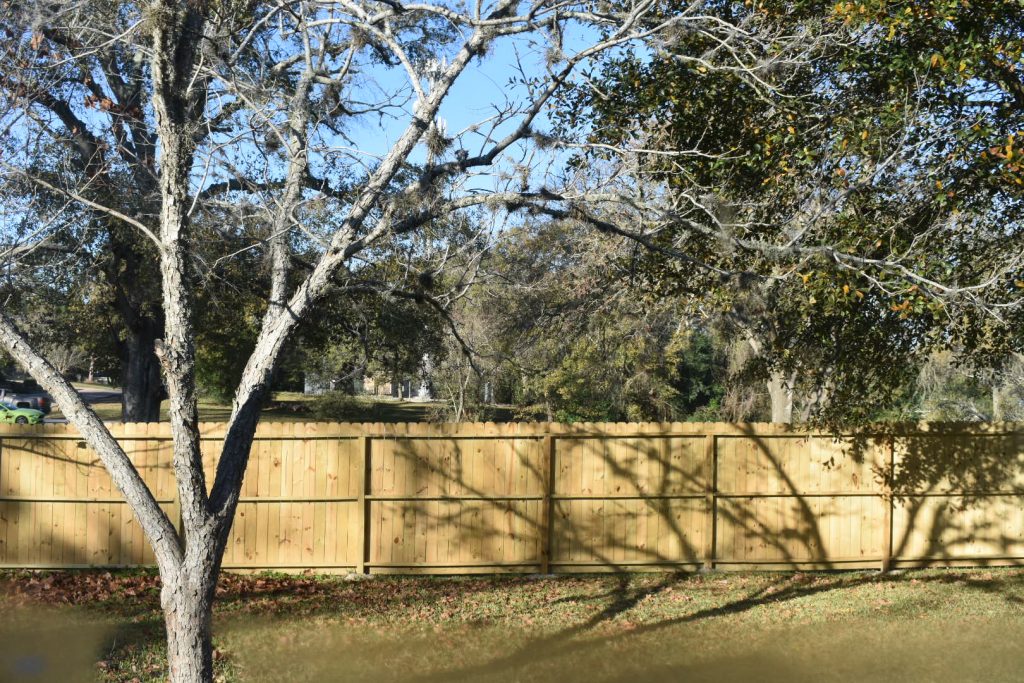 HEMPSTEAD, Texas – Residing on a corner lot, adjacent to two major streets can cause concern for any parent. Imagine the heightened anxiety if you’re a parent living with PTSD.

Thanks to the national nonprofit Hope For The Warriors and its Warrior’s Wish program, Army veteran Sgt. William “Bill” Glas recently received a donation of a privacy fence valued at $9,900 with the goal of lessening that anxiety and turning his family’s backyard into a secluded sanctuary for him, his wife and four children.

Hope For The Warriors is dedicated to restoring a sense of self, family and hope to service members, their families, and families of the fallen. One if its first established programs, Warrior’s Wish fulfills a desire for a better quality-of-life or supports a quest for gratifying endeavors for those who have sustained physical and psychological wounds in the line of duty.

A Texas native, Glas enlisted in the Army in January 2003 and was stationed at Fort Drum, N.Y. He was assigned to an Infantry Mortar Platoon and deployed to Afghanistan in May. Within a few months of being in Afghanistan, Glas lost a friend whom he tried to revive during a firefight and shortly after was shot in the shoulder during another firefight. He was treated for his gunshot wound and finished the yearlong deployment.

In May 2005, Glas deployed to Iraq and completed over 580 missions leading his own squad. He encountered several IEDs, however on May 15, 2006, just a month before the end of the deployment, an explosion from an IED threw him out of his vehicle resulting in several severe injuries. Glas was medically evacuated to Brooke Army Military Medical Center (BAMMC) and over the span of two years underwent 13 surgeries and physical therapy learning to walk again.

“Thank you so much for this fence,” said Glas. “You gave me sleep. You gave my family security. From the bottom of my heart, thank you.”

After 10 years serving in the Army, Glas medically retired in 2011. Today, he operates a small business with his wife selling handcrafted bath, body, beard and abode products, Tubb Starr.

“Sgt. Glas is not alone. It’s not uncommon for veterans to have a heightened sense of insecurity after leaving the military,” said Robin Kelleher, CEO and president of Hope For The Warriors. “Sgt. Glas had an extremely dangerous job in the Army as a platoon sergeant, and we’re honored to provide this extra sense of security for him and his family so they can enjoy their backyard.”

In 2020, six wishes will be granted through Hope For The Warriors.

Since the program’s inception, Warrior’s Wish has granted over 200 wishes.

For sponsorship and volunteer opportunities for the Warrior’s Wish program, contact Erin Lester at elester@hopeforthewarriors.org  or (703) 268-9946.

About Hope For The Warriors: Founded in 2006, Hope For The Warriors is a national nonprofit dedicated to restoring a sense of self, family and hope for post-9/11 veterans, service members and military families. Since its inception, Hope For The Warriors has served over 36,000 through a variety of support programs focused on clinical health and wellness, sports and recreation and transition. One of the nonprofit’s first programs, Military Spouse and Caregiver Scholarships, has awarded 150 scholarships to caregivers and families of the fallen. For more information, visit hopeforthewarriors.org, Facebook, Twitter or Instagram.