Volunteer of the Month | August 2022: Tony Intrieri and Scott Spielman 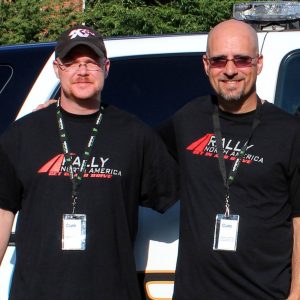 This August, Hope For The Warriors is proud to announce two remarkable Volunteers of the Month! Please join us in thanking both Tony Intrieri and Scott Spielman, event organizers with Rally North America, who time and time again step up for our warrior community!

Established in 2009, Rally North America unites automotive enthusiasts from all over the United States and Canada to drive for a cause. Through scavenger-hunt-style rally events, combining the participant’s love of cars with a desire to give back, Rally North America has raised over $2,000,000 for several nonprofit organizations, including Hope For The Warriors!

“In late 2014, we started researching organizations that help veterans,” said Scott. “Ultimately, all that research led us back to Hope For The Warriors, as they were the best and most efficient organization we found. Tony and I reached out to HOPE’s President/CEO Robin Kelleher and Mission Ambassador and Event Officer Erin Thompson, explained what we did, and if Hope For The Warriors would be interested in supporting Rally North America. Thankfully, they said yes! Since then, our relationship with HOPE has been nothing but outstanding.”

This past June, Tony and Scott’s efforts were instrumental in the 2022 Charity Rally. Starting in Durango, Colorado, and finishing up in Las Vegas, Nevada, 160 participants rallied over four days to the finish line, raising over $222,000 for HOPE!

“Rally North America was started as an alternative to the majority of the other high dollar automotive rallies,” said Tony. “We wanted to see the continent, be inclusive to anyone with our low entry fee, and help worthy causes along the way. Throughout the years, doing something for charity organizations became more and more important to our group. To me, the work I do to organize the route and find places for participants to see and stay is my way of thanking them for everything they do in supporting the charities we have selected.”

Just like Tony, the desire to give back and volunteer is a driving force for Scott in all he does with Rally North America.

“Volunteering has been very important to me throughout my life, and it has put me in touch with some of the most giving, caring, and selfless people in this country,” said Scott. “It’s rewarding in ways that are beyond words to describe and is a feeling that can’t be matched.” 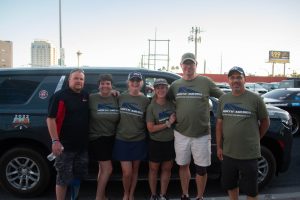 Supporting our nation’s heroes and their families is something Tony and Scott hold close to their hearts as they are both United States Air Force veterans. Tony served nine and a half years and volunteered for duty during Operation Desert Storm. During this time, he saw first-hand the physical and mental effects of war on service members. The work HOPE does to help these brave men and women on their recovery journey is one of the many reasons Tony advocates for our organization.

“HOPE is truly a great organization to work with during an event,” said Tony. “They are willing to help us help them. Seeing the positive impact they make with veterans and their families over the years has been impressive. Our group has been able to help touch the lives of military families through HOPE, and we will proudly continue to do so moving forward.”

Serving 22 years as a Heavy Aircraft Maintainer during his time in the Air Force and still serving today as a civil servant working at Wright-Patterson Air Force Base, Scott is also passionate about HOPE’s mission and values.

“Hope For The Warriors is the best organization to work with,” said Scott. “The support we have received during the time we’ve been working together is simply amazing, and it goes to show what kind of organization HOPE is. They truly care about their mission and every single individual that they touch. It’s a complete honor to work with such a great organization, and I can’t wait to break $1,000,000 in direct donations to HOPE.”

Through the leadership of Tony and Scott, Rally North America has raised over $500,000 in total for HOPE! We can’t thank them enough for their generosity, as it helps us continue to meet the needs and change the lives of military families throughout the nation. We look forward to all we can accomplish together in the future.