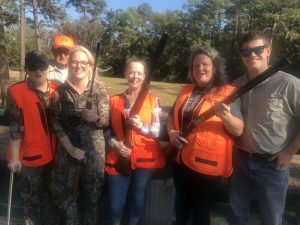 SPRINGFIELD, Va. (March, 17 2022) – When retired Major General Randall West was approached by a Florida hunting preserve about the possibility of putting together a trip for female veterans, he knew exactly who to contact: Hope For The Warriors.

West, who retired from the Marine Corps in 2002 after more than 35 years of service, had worked with HOPE in the past recruiting veterans for hunting excursions and knew they would come through. Currently, he is the chairman of the board for Patriots 4, a nonprofit committed to supporting combat wounded service members and their families with assistance and facilities to enjoy rest and relaxation in the outdoors.

“Last year the owner of the preserve said we should bring some ladies in and shoot deer. I contacted HOPE, we worked together and set up the hunt. I gave them the time and location and said I would buy the plane tickets if they would find the people,” said West.

HOPE connected with four women veterans, West said, one from New England and the remaining three from western states. Prior to the trip, one of the veterans got sick and was unable to participate but will be along for a future hunt.

“Hope For The Warriors has been able to offer sponsored hunts across the country through its Outdoor Adventures programs for years, thanks to great partners like Major General West and nonprofits like Patriot 4,” said Jenna McDonald director of physical wellness, sports & recreation for Hope For The Warriors.

The hunt was held on a hunting ranch between Jacksonville, Florida, and St. Augustine, Florida, with an abundance of whitetail deer, quail, Osceola turkeys and other species of game.

The three veterans were experienced hunters and expected to take home plenty of venison for their freezers.

“Because they were flying in from so far, their flights were late getting in and we didn’t get into the woods as early as we should have,” said West, who heads a veterans nonprofit founded by his family, Patriots 4, which specializes in outdoor experiences for wounded veterans and their families.

“We only got one deer between all three of them that first day.” And the second day was totally washed out by rain. A quail hunt was scheduled for the third day, but West made sure the women went home with plenty of venison.

“The third day was supposed to be a quail hunt with horse outriders and guides. It was really nice. I knew they wanted venison, so once we got them on the quail hunt and they had their first point, I left them and went out to hunt deer,” said West. “I was able to get a second deer and one of the preserve guides got a third and we got them processed and each one took home their own cooler packed with deer.”

West and McDonald have talked about more collaboration in the future and have planned a turkey hunt for female veterans in the coming weeks.

“I really like working with Hope For The Warriors and hopefully we can keep that going forever,” said West. “We think we bring them some events they wouldn’t have the opportunity to have. We have some great connections with the outdoor community.”

About Hope For The Warriors: Founded in 2006, Hope For The Warriors is a national nonprofit dedicated to restoring a sense of self, family and hope for post-9/11 veterans, service members and military families. Since its inception, Hope For The Warriors has served over 40,000 through a variety of support programs focused on clinical health and wellness, sports and recreation and transition. One of the nonprofit’s first programs, Military Spouse and Caregiver Scholarships, has awarded 183 scholarships to caregivers and families of the fallen. For more information, visit hopeforthewarriors.org, Facebook, Twitter or Instagram.