Veteran Restores Self Through Team Hope For The Warriors 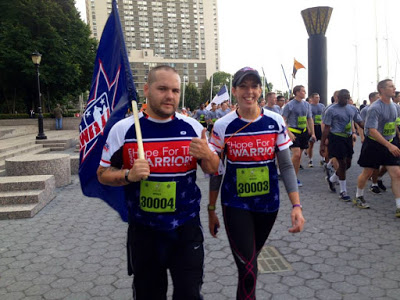 US Air Force Veteran, Michael Roesch, will not slow down.
Through injuries and setbacks he continues to participate in endurance events
in support of veterans on Team Hope For The Warriors.
Michael served in the Air Force from 1999 to 2003. His transition
after service was challenging; he described himself as “rough around the edges”
and was not prepared for the adjustment back to civilian life. Michael grew up
a military brat, and once he left the Air Force he lost the warrior culture that
had surrounded him his entire life. However, through fitness and physical
challenges, Michael found a place to call home through Hope For The
Warriors. 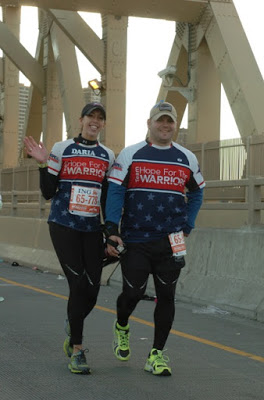 In 2012, while doing a Tough Mudder, Michael saw a
participant wearing a Hope For The Warriors shirt, which led him to reach out
to the organization. He then began participating in events with Team Hope For
The Warriors; his first event was the 100-Mile Relay with the Marines. After a
positive experience Michael went on to participate in any endurance event he
could register for, including the Long Island Run For The Warriors and the New
York City Marathon.
Michael found a community through Hope For The Warriors,
where he was recognized and appreciated for his service. Hope For The Warriors also
gave him the ability to give back and continue to serve the military community
by connecting him with other veterans who were struggling with their transitions.
In 2013, with the NYC Marathon approaching, Michael seriously
injured his knee. Being the consummate warrior, he continued his training and
participated in the marathon. Around Mile 9 his knee completely gave out;
however, he walked to the finish line. Six months later Michael had his first
knee surgery, and went right back to supporting veterans through endurance
events. On March 23, 2016, he needed another surgery on his knee as it became
painful for him to walk.
As Michael shared the challenges he was facing with his
knees to his Battle Buddies and fellow Team Hope For The Warriors members, Len Lacina
and Steve Suwilic, his friends asked him how he planned on continuing to live
an active life and do what he loves with non-functioning knees. This
conversation helped convince Michael to request a handcycle, so he reached out
to Hope For The Warriors. On November 7, 2015, Michael was given a handcycle at
the 8th Annual Long Island Run For The Warriors.
Michael has put his handcycle to good use, and this winter
he logged about 300-400 miles on his new ride. Recently, he has also
participated in the Lincoln Tunnel Challenge and three marathons with Team Eva (Every Veteran Appreciated). This
year Michael plans on participating in seven of the ten Run For The Warriors
Races and the Marine Corps Marathon with Team Hope For The Warriors. In August,
he is planning a bike ride with other veterans that will start in Montauk, Long
Island and end in Battery Park, Manhattan, covering well over 100 miles.
Beyond his resiliency, Michael has a secret weapon that
keeps him going—his girlfriend, Daria Smith. In his own words, “She does not
allow me to be a lesser version of myself.” Daria participates in every
endurance event with Michael and offers immense support. Both are pillars in
the Team Hope For The Warriors community and inspire us all to become the best
versions of ourselves.
We will continue to follow Michael and Daria as they train
for many events this year! To learn more about Team Hope For The Warriors and
find out how you can get involved, visit: www.hopeforthewarriors.org. For
the complete 2016 Run For The Warriors schedule, visit: www.runforthewarriors.org.
Facebook0Tweet0LinkedIn0Print0Email0