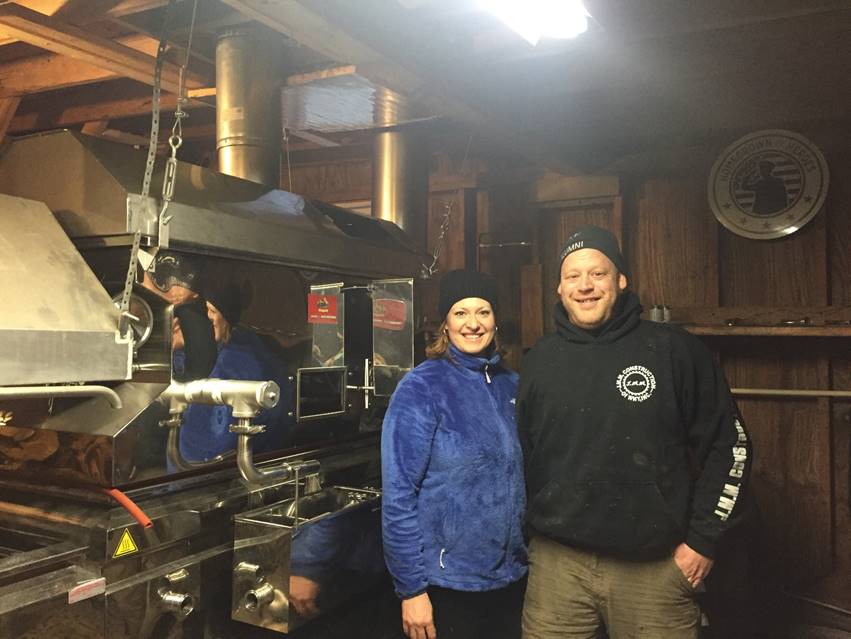 Marine veterans Mark and Denise Beyers with their maple syrup steam away hood gifted from Hope For The Warriors’ A Warrior’s Wish program.  For more photos, visit http://bit.ly/2CbOayf.

Since medically retiring from the Marines in 2006, Beyers along with his wife, also a veteran Marine, have concentrated on growing their farm, Beyers Maple Farm. The couple’s number-one product is maple syrup along with honey and organic free range turkeys and chickens.

“It takes bold ambition and a pioneering spirit to work outdoors in the wintertime,” said Beyers. “Our job is made easier because of the generosity of Hope For The Warriors granting our wish.”

Beyers and his wife both enlisted in the Marine Corps Reserves in 1998 after high school graduation and were stationed out of Buffalo, N.Y. While in the Reserves, Beyers worked for his father’s construction company, operating machinery and farming equipment. In 2005, he was activated and deployed to Iraq.

While on foot patrol with his squad he was severely injured by a remote controlled improvised explosive device with shrapnel hitting his right limbs, and pressure from the blast compromising his internal organs. He was medically evacuated and eventually transferred to Walter Reed National Military Medical Center in Bethesda, Maryland.

As a result of the blast, Beyers lost his right arm and had a right leg below-the-knee amputation in addition to a collapsed lung. He also had to have a portion of his colon removed. Following 39 surgeries and multiple infections, he was medically retired and transitioned home to New York in August 2006.

“Both Lance Corporal Beyers and his wife volunteered to serve right out of high school not knowing the outcome,” said Robin Kelleher, president and CEO of Hope For The Warriors. “They have since spent years away from home serving and receiving care for Lance Corporal Beyers’ combat injuries. Therefore, we’re honored to provide the maple syrup steam hood to help make the extracting process more efficient for their business allowing them more family time.”

In 2017, 13 wishes were granted through Hope For The Warriors. The wishes fulfill a desire for a better quality of life or support a quest for gratifying endeavors for those who have sustained severe physical and psychological wounds in the line of duty.

Since the program’s inception, A Warrior’s Wish has granted 180 wishes.

Beyers wish was sponsored by Air Force veteran and Ride For The Warriors organizer, Michael Nehlsen, his daughter and Hillmann Consulting.

For more information on Hope For The Warriors and A Warrior’s Wish, visit hopeforthewarriors.org,Facebook or Twitter.

Founded in 2006, Hope For The Warriors is a national nonprofit dedicated to restoring a sense of self, family and hope for post 9/11 veterans, service members and military families. Since its inception, Hope For The Warriors has served more than 19,000 through a variety of support programs focused on transition services, clinical health and wellness, sports and recreation and community development and engagement. The nonprofit’s first program, A Warrior’s Wish, has granted 180 wishes to fulfill a desire for a better quality of life or support a quest for gratifying endeavors. In addition, Run For The Warriors has captured the hearts of more than 23,500 since 2010. For more information, visit hopeforthewarriors.org, Facebook or Twitter.