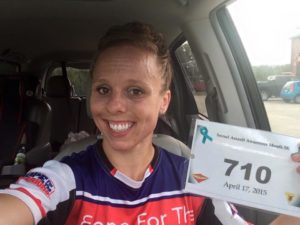 Over ten years later, the power of her resiliency through her darkest days has fueled her bravery in sharing her story of family, forgiveness, and discovering her self-worth as a way to advocate for fellow MST survivors on their own healing journey.

From 2016 to 2018, MST causes jumped nearly 40 percent. A 2018 report by the Pentagon found that 20,500 men and women in the Armed Forces were victims of sexual assault, and it is estimated that nearly 70% do not officially report the incidents.

Catherine is a testament that one isn’t defined by his or her trauma; that there is hope in serving others on their healing journeys.

Her service and struggle 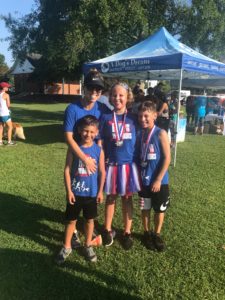 Catherine loved serving in the Army. Military service was something instilled in her at young age by her grandfather, father, and brothers. During her transition back to civilian life in 2007, she missed the camaraderie and the people, but above all, she missed herself.

Over the next three years, Catherine found it challenging to navigate her life. She was struggling as a wife, as a mom, and as an individual. She turned to running, and metaphorically ran from her problems. Running became a band-aid for deep wounds that needed something much stronger to mend.

A month later, Catherine crossed the finish line as her husband, a Marine veteran, and children by her side cheering her on every step of the way. It was in that moment that her healing journey began.

Previously frustrated by the lack of resources and access to counseling as a veteran and a mom of two young children, Catherine, while on her runner’s high, decided to choose courage and wrote an email to Hope For The Warriors, reaching out for support. Full of fear and instant regret upon pressing send due to the level of vulnerability she opened herself up to, the response she received not only changed her life, but also the lives of her family. 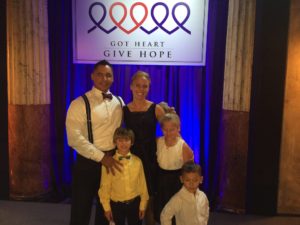 This May marks 10 years since Catherine and her family joined the HOPE family. Through Hope For The Warriors, Catherine received the counseling support she needed, grew a stronger passion for running as a member of Team Hope For The Warriors, and found a support system for her and her family. Above all, she found the camaraderie in the staff, fellow veterans, and military families that she longed for after transitioning to civilian life.

“HOPE helped me find that [camaraderie] again,” said Catherine. “[Once again] I’m part of a family willing to selfless serve each other and others. It’s no surprise with a staff filled with so many veterans, military spouses, and talented individuals using their gifts for a greater purpose of serving others. We have met the most heroic and amazing individuals who have taught my children there are not limitations to the human spirit.”

From trauma to recovery 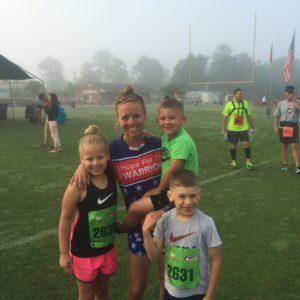 Today, Catherine feels that every day is a gift and an opportunity to grow as a person. She serves others as an advocate for those who are healing from the trauma of MST.

Catherine is currently pursing formal training through the National Sexual Violence Resource Center to volunteer locally in her Eastern North Carolina community and plans to continue her education in a social work graduate program.

Today, with HOPE as her platform, she shares a message of hope with those experiencing sexual assault or recovering from the trauma of it. 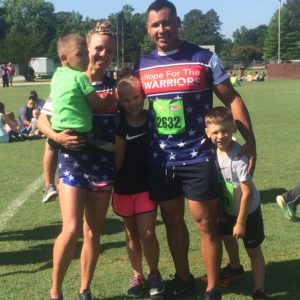 Her message is simple but powerful: It is YOUR journey but you are not alone.

“The battle is not an easy one, but the fight is worth it, because YOU ARE WORTH IT,” she said. “For many who have experienced MST, those words may be hard to read, let alone say. But it is the truth. Your value, your strength and your dignity are there and have always been there. Trust… believe… know that your past will only make you more resilient and stronger than you can only imagine.

“Do not lose hope. You can do this. I believe in you. There are so many people in your that see it in you. Now is your time, and YOU ARE WORTH IT!

Hope For The Warriors helps military sexual trauma (MST) survivors find HOPE. Whether the trauma happened at a duty station in the US or while deployed, MST survivors can find support and healing in our programs and services by applying for services at www.hopeforthewarriors.org.

Catherine recently chatted with a special member of our HOPE family, Sarah Dale of BraveLove TV. Watch her exclusive interview and be inspired by two resilient and remarkable women: