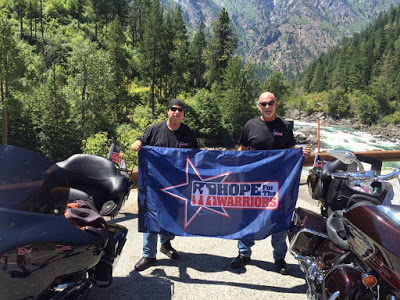 On July 1, 2015, Air Force Veteran, Michael Nehlsen, and Jeff Molesko began a cross-country motorcycle trip, called Riding For Warriors, to raise funds and awareness for Hope For The Warriors®. Their journey started in Seattle, Washington, and ended on July 12, 2015, in Union, NJ. The duo logged over 4,344 miles and traveled through 14 states gaining support for military families. Michael, a New York native, and Jeff, a New Jersey native, made many stops along the way, including: the Jimi Hendrix Memorial, Mount Rushmore, several national parks, and Minot Air Force Base in North Dakota.
“As a young man, I had the privilege to serve my country […] During this time I saw and experienced intimately the sacrifices service members and their families were expected to make,” said Michael. “I continue to be deeply appreciative of the struggles faced by our service members, and am committed to helping them achieve their goals.”
Together, Michael and Jeff raised over $40,000 from Riding For Warriors which went to support A Warrior’s Wish®, a program within Hope For The Warriors®. A Warrior’s Wish® honors the goals and desires of severely wounded service members, veterans, and their families. Wishes fulfill a desire for a better quality of life, or support a quest for life-gratifying endeavors for post-9/11 service members, their families, and families of the fallen who have sustained physical and psychological wounds in the line of duty. 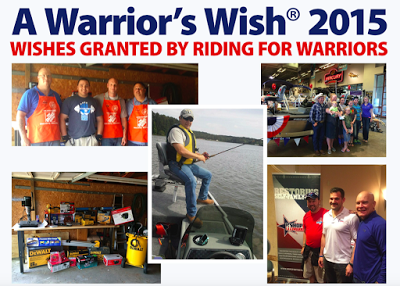 Riding For Warriors successfully raised over $40,000 to support the following Wishes: two road bicycles for two Army veterans serving in their community as peer mentors to other veterans, a bass boat for an Army veteran actively engaged as the Veterans Minister in his East Texas community, and woodworking tools and equipment for two service members seeking a new means of supporting their family upon separating from the Marine Corps.
Riding For Warriors has given these incredible veterans and military families the opportunity to improve their lives and accomplish new goals. Hope For The Warriors® would like to thank Michael, Jeff, and all of their supporters for restoring Hope around the country. Find out more about A Warriors Wish® and learn how you can help support the Wishes of deserving service members!