“The guitar is a miniature orchestra in itself.”
–Ludwig van Beethoven 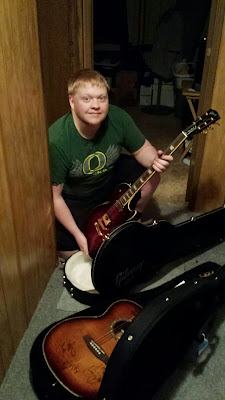 For some,
music is simply noise in the background; for others, music is an art form that
brings them joy and even hope.  For one
Marine, music, and specifically creating music, was therapeutic and life
changing. This Marine spent several years dealing with multiple operations for
a brain tumor and thyroid cancer, all while battling PTSD.  The one source of hope he found was through
playing guitar, an instrument that a friend had taught him when stationed in
Okinawa.

His Wish to
Hope For The Warriors® was a simple one—he simply wanted an electric
guitar.  He has explained that the
electric guitar was easier on his hands to play than his acoustic guitar.  He also shared with Hope For The Warriors®
“Even when I have an insomnia-filled night or just lose interest in doing
anything that I used to, it always seems to be something I can fall back on and
know that by playing, regardless of my abilities, I have something that I can
sit back and just use to pour the emotions out without turning to alcohol or
more periods of rage and violence.”

Hope For The
Warriors® was happy to grant this Wish and through a special connection, was
able to take one more exciting step.
Always a champion for others, Zac Brown generously donated an
autographed guitar to this young Veteran.
Knowing that the autographed guitar would better serve as a token of
hope and appreciation, Hope For The Warriors® obtained another guitar from
Gibson for the young musician to play.

Thank you to
Zac Brown and the Zac Brown Band, Gibson Guitars and to all of our generous donors who made granting
this Wish possible.