Four men deployed to Afghanistan together.

As with most combat deployments, these men formed close bonds that will last a lifetime.

Hope For The Warriors® recently organized a hunting trip for these four men so they were able to reunite for a weekend in the great outdoors.  The weekend was successful in many ways.  First, each returned home with a buck.  But more importantly, they reconnected with the men that they depended on for so long while deployed and so far from home.

We were also glad to keep these men close to home.  The hunt took place on private property in Mississippi, home for three of these men.  They had been far from home long enough. 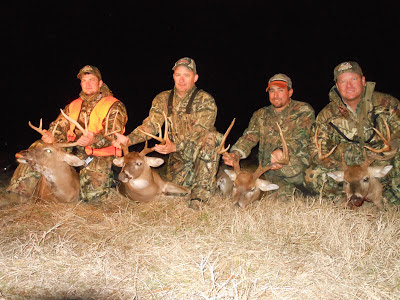 Two of the men shared:
“What an incredible experience! I would never be able to experience a hunting trip like that on my own, and getting to reunite with my deployment Army buddies made it that much more special.  Thank you Hope For The Warriors®!”
“Never in my 27 years of the military have I ever received such a gift.  It was truly a hunt of a lifetime.”
Hope For The Warriors® thanks Mossy Oak and Greif, Inc. for hosting the warriors.  Without their help, this hunt would not have been possible.
﻿
Facebook0Tweet0LinkedIn0Print0Email0