A Sergeant in the House 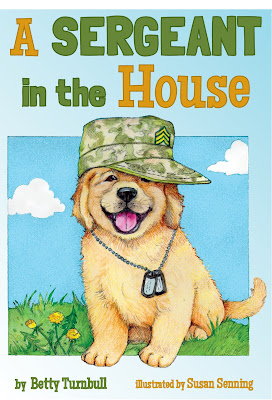 Today’s guest blogger is Betty Turnbull, author of the book A Sergeant In The House, a children’s book that shares the heartwarming story of a boy’s love for his father, a man serving in combat.  Proceeds from the book will benefit Hope For The Warriors®.  Thank you to Betty for sharing her thoughts and for choosing Hope For The Warriors® as the beneficiary for her hardwork.

In
a time when we hear more and more about our service men and women and the
battlefield injuries they sustain––be them psychological or physical––I felt
called to write a story that would explain the sacrifices of our heroes in a
way that children could connect to them. And I wanted to do it in a way that
would give back to our nation’s warriors. So it was an easy decision to donate
100% of my author royalties to Hope For The Warriors ®.
A Sergeant In The
House
is the story of Lenny, a young boy whose father joins the military to serve his
country. Lenny desperately wants a puppy. But the family must move frequently
and Lenny is still very young to care for an animal. So Lenny strikes a
bargain: When his daddy becomes a sergeant, Lenny can have a puppy. When his
father is deployed to war, Lenny learns what it means to be responsible, to
care for his family, and to help around the house. A dreaded phone call brings
the news that Lenny’s father has been injured and is being sent home. When
Lenny’s father explains that this means he’ll never become a sergeant, Lenny
realizes that what he truly wants is his daddy––puppy or no puppy.
I
grew up in what I would call a very patriotic home. My dad was a veteran of
WWII. He met my mom at Wright Patterson Field in Ohio, where she was working as
a secretary to a general. I grew up proud of my country.
I
spent most of my adult life outside the United States in Haiti, where my
husband and I worked in education and rural development. Our three children
were born and raised in Haiti.
During
this time, I grew to appreciate the United States and the freedoms I grew up
with even more. I remember how surprised I was when a Haitian friend insisted
we talk in a whisper in the open yard. He was fearful that someone would hear
him speak against the government and retaliate by hurting his family. No longer
did I take the First Amendment for granted.
When
our oldest son announced at age 12 that he wanted to attend the Air Force
Academy, I wasn’t surprised since I knew he shared our patriotism and appreciation
of the United States––plus I suspected something about cool airplanes had
caught his attention. I was surprised, however, when at 13, 14, 15 and onward
he held onto this dream. In 1991, he entered the Academy. Today he is a
Lieutenant Colonel and currently deployed to Afghanistan.

Because
of his service, my great respect for our military has grown from cheering on
the branches of the military as groups of people to realizing that these groups
are made up of individuals. These individuals are sons and daughters, wives and
husbands, and fathers and mothers. And my son, himself a husband and father, is
just one of the thousands who puts himself in harm’s way to protect my
freedoms. EVERY. DAY. And there are thousands of other mothers, fathers,
spouses and children who wake up every day with a prayer on their lips for
protection and go to sleep every night with a “thank you for another day.”

I’ve
also learned firsthand, that when one member of the family serves, all members
serve. With each move, spouses get the job of creating a home out of a house
all over again and changing or giving up careers; children have to make new
friends and adjust to new schools. Long hours and deployment leave spouses
holding it all together. And it’s the family who steps up when a loved one
returns, because too often our heroes return with physical and psychological injuries.
The
ongoing battles that our warriors continue to fight are our ongoing battles.
Organizations like Hope For The Warriors® make it possible for us to be a part.
I’ve had a burden for years to find a way to pay tribute to our heroes and
their heroic families. A Sergeant in the House is that tribute. My hope
is that it will warm the hearts of those who read it and bring awareness of
just how much families sacrifice for the rest of us. May we all start each day
with a thank you for our freedoms and may we not take for granted the price
paid to keep them.
I
feel privileged to be partnering with Hope For The Warriors® by donating my
royalties, and I invite you to join me in supporting our nation’s heroes
through this worthy organization.