The Few, The Proud, The Military Child

Get the Latest Updates
FacebookTweetLinkedInPrintEmail
by Chrystal Thompson

It is difficult to be fully prepared for the aftermath of
war. The physical and psychological wounds have not only impacted the members
of our armed forces but have had significant impacts on the loved ones waiting
for them upon their return home.  A study
completed back in 2011 by Cozza and Guimond estimated that more than 30,000
military children had a family member who had been injured in Operation Iraqi
Freedom (OIF) and Operation Enduring Freedom (OEF).  Since that time, the numbers of wounded and
the numbers of those diagnosed with PTSD have increased.

In 1986, U.S. Secretary of Defense Caspar W. Weinberger
designated each April as “The Month of the Military Child.” Since that time,
the impact of service on military children has significantly increased.
According to the Department of Defense, there are more than 1.3 million
military children that are school-aged.
More than 700,000 children have experienced the deployment of one parent
or more since 2001.
It is important to recognize the contribution of the
children whose parent or parents serve our country. Aida Sanchez is the wife
of Hector Sanchez and mother of two elementary school aged children.  She candidly opened up about her perspective
on the life of the military child, including her husband’s battle with severe
combat-related post-traumatic stress and its impact on her children.
“To give the kids a voice is so important because the kids
always get lost. They’re the ones we need to protect the most because they
didn’t make the decision to go to war or get married to a Marine or Soldier and
they’re 100% innocent in this. That’s what parents and teachers need to
understand.” 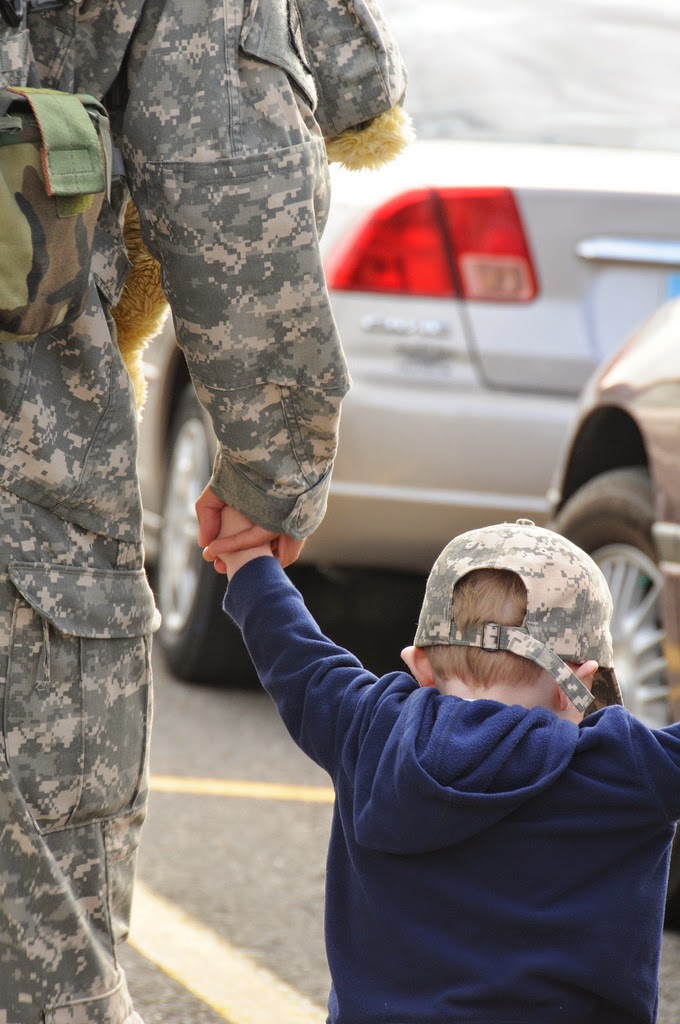 The impact of military life on children with parents in the
armed forces includes the more obvious stressors of frequent relocations and
prolonged separations (Leskin et al., 2013).
The stressors that are not as commonly known are the increased risk of
adverse effects on emotional, behavioral, and academic functioning, and
difficulty developing and maintaining interpersonal relationships (Leskin et
al., 2013).
PTSD has an effect on the family unit, including the
military child.  Children tend to mirror
the distress and functional capacity of their parents (Cozza & Guimond,
2011).  This means that they may develop
depression, difficulty at school, anxiety, and social, behavioral, and
emotional problems.
Aida witnessed her children experiencing levels of stress
that mimicked her relationship with her husband during the “darker times.” The
oldest, an eight-year-old, continues to have small-scale outbursts and emotions
that stem from her secondary traumatization.
Aida recognizes the importance of encouraging open communication between
her and her children even when the topics are hard to swallow.
Hector served eight years in the Marine Corps, including a
total of 19 months deployed to Iraq. During his combat, he endured the impact
of five IEDs and witnessed severe combat conditions as an Infantry
Mortarman.  Upon his return to the home
front, Aida and the children were there to care for Hector during his recovery,
rehabilitation, and reintegration.  Aida
recalls the first few years as a difficult time period.
“It was hard for me to put on a happy face all the time in
front of my children.  It was like an out
of body experience. As the mom I had to take everything that was going on and
push it aside for the kids to have some sort of normalcy in their lives.”
There was a point when Hector’s PTSD pushed Aida to consider
taking herself and her children out of the situation, but she felt bounded to
her husband by the commitment of marriage; to love one in sickness or in
health.
The family’s capacity to maintain structure, provide
emotional support, and to lessen distress, are strategies to help children
adjust to the physical and psychological wounds of their parents returning to
the home front (Cozza & Guimond, 2011). Fulfilling multiple roles as
caregiver, military spouse, and mother, Aida realized that it was her
responsibility to take control and turn her family into what she wanted it to
be.  To do this, she needed to fight away
the negative energy and replace it with positive energy.
Aida has developed techniques to strengthen her family and
lessen the distress in the Sanchez household.
She does so by explaining PTSD in a way for her children to understand
and reinforcing on a regular basis the importance of healing together as a
family.  She takes this psycho-education
and reinforcement one step further and remembers to verbally thank her children
for being strong, similar to thanking a service member for his or her service
to our country.  Early on, Aida ensured
that her children’s teachers were aware of Hector’s transition and made sure
that both were seeing a school counselor on a weekly basis.
Hector has made huge strides in his recovery,
rehabilitation, and reintegration with his family by his side for emotional,
spiritual, and affirmative support. The Sanchez family takes one day at a time,
fostering their strengths and healing together as a whole.
FacebookTweetLinkedInPrintEmail