Jean is a member of Team Hope For The Warriors® and she will join the Team at the ING New York City Marathon this November.  However, Jean will do more than just run.  She will complete all 26.2 miles carrying the American flag.

On Saturday, Jean held a Relay Run at her local high school with two goals in mind.  First, to remember the events of September 11 and honor those lost.  And second, to raise funds for Hope For The Warriors®.

The event began at 9 a.m. with the plan to have at least one person running or walking around the track at all times until 11 p.m.  To participate, people donated $5/lap or no more than $25.  Of course, people were welcome to donate more too.

The day was beautiful, although windy.  It began with Jean talking to the group about Hope For The Warriors® and the goals of our programs.  A veteran spoke and the entire group sang the National Anthem. 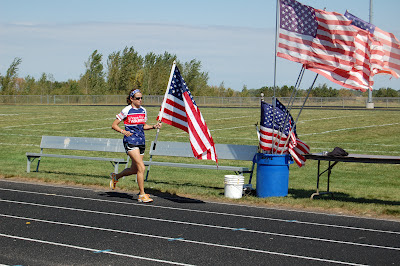 Jean ran the first lap but she was definitely not alone.  She was joined by firefighters, walking in full gear, the high school cross country team, veterans, and many more from the community.  All together, 256 laps were completed and more than $800 was raised.

Jean also met her goal of completing 60 laps.  The day had to end a little early due to the high winds, but all goals were met before the flags blew away!

Thank you to Jean for planning this great event that raised funds and awareness for Hope For The Warriors®.  When asked why she runs with a flag, she shares:

“Why
carry the flag?” is something I often get asked. I wanted to do something to
get people excited about their country. Americans love their flag. It is a
symbol of Hope and Freedom, among others.  New York is a center of hope for
this nation. 11 years ago, this nation united to give hope to a city that had
been devastatingly attacked.   Since running with the flag, I have
seen how such divided people can become one.  I have seen what it means to
veterans who have sacrificed so much for all of us.  I want them to know
that what they have done is appreciated, and not done in vain.  I don’t
just carry the flag for myself, I carry it for all Americans.  How fitting
it will be to carry our flag through the streets of New York, and also, to run
and raise money for Team Hope For The Warriors®.  I am so honored to have
this opportunity. 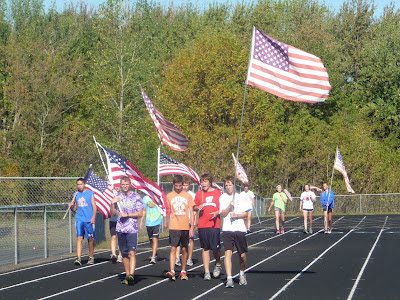