Testimonial: Mother of a Fallen Hero 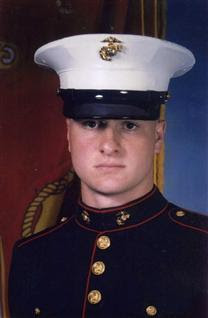 Today’s blog is from the mother of Fallen Marine, Sgt. Brandon Bury. Brandon is one of the service members that will be honored at the annual Kingwood Fallen Heroes Memorial Golf Tournament.

“A mother’s worst nightmare confronted me on June 10, 2010,
when two Marines came to my door. They gave my husband and me the dreaded news:
“Your son has been killed in Afghanistan.” Our son, Sgt. Brandon Bury, was on
his third deployment in a combat zone, and although we knew his mission put him
in danger, we believed he would return home safely. We were in shock to learn
that he would not.”

“Soon after, one of my best friends came by, and asked, “What do you need?” At
that point I didn’t know. She immediately called her daughter-in-law, Amber
Johnson, a Critical Care Coordinator for Hope For The Warriors®. Within
minutes, the phone was ringing, and Hope For The Warriors® came to my rescue.”

“Our family situation offered logistical challenges. I live in Texas, Brandon’s
wife and two young sons in California and my extended family is scattered
across Ohio. Services were going to be held in California and Texas. Without
hesitation, Hope For The Warriors® offered assistance with travel arrangements,
sage advice and continued emotional support.”

“I also had the privilege of witnessing firsthand the benefits that Hope For The
Warriors® provides to injured veterans. The group hosted a weekend of fun in
Tyler, TX, that concluded with a dinner tribute for their sacrifices. I will
never forget seeing the faces of the proud young men and women as they strolled
by our table. These individuals knew their sacrifices were appreciated by so
many. Hope For The Warriors® understands the challenges, pride, and joy of
being a military family, and it is committed to restoring a sense of self for
wounded vets, fallen heroes and their families. Everyone I have met in the
organization is honorable, passionate and committed about their mission.”

“My son’s family and friends were so moved by the organization and its
commitment to help others that they searched for a way to honor our heroes and
donate to this fine organization. A Golf Tournament was organized in Kingwood,
Texas, (www.kingwoodfallenheroes.com) by one of my son’s best friends, Scott
Mitchell. Last year was the first annual tournament, and it raised $60,000 for
a number of charities, including Hope For The Warriors®. The second annual
tournament is scheduled for April 27, 2013. Organizers are hoping to shatter
last year’s amount and donate the proceeds to this worthwhile organization.”