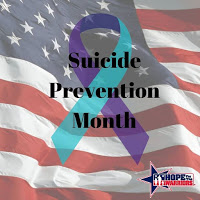 September is National Suicide Prevention Month. As part of this movement, Hope For The Warriors® is dedicated to raising awareness to suicide within the military population. And with that awareness is our shared responsibility to reach out to veterans in need.
According to the Department of Defense Task Force on the Prevention of Suicide by Members of the Armed Forces, more than 1,300 active duty service members died by suicide from 2006 to 2010. And studies estimate that 8,000 veterans die by suicide each year, or approximately 22 each day.
For Suicide Prevention Month and beyond, Hope For The Warriors® understands the importance of our shared responsibility to turn awareness into action. To honor the 22 veterans who die by suicide each day, we encourage you to make a $22 donation to collectively impact those who need our help. Also consider a recurring monthly donation to support service members throughout the year.
Thank you for joining us in our mission to restore self, family, and hope for years to come. 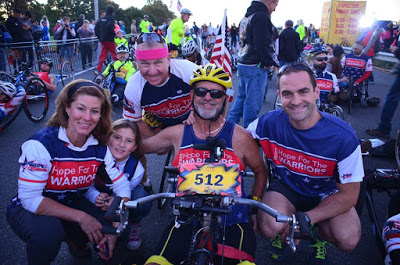 Fall is upon us and many exciting Team Hope For The Warriors® races are fast approaching. Below is a list of the upcoming events:
*Handcycle friendly race
Fundraising Tip:

Ask your most trusted and dedicated supporters, either family or friends, to share your fundraising information on their social media pages. This will allow your fundraising page to be seen by another group of potential supporters through different friend circles.
Training Tip:

As you head out on a long run before the Marine Corps Marathon or in your general training read this Active article for some helpful tips on how to have a successful run:
http://bit.ly/1NwT1rm
Team Member Corner: John Germain
Team Hope For The Warriors® member, John Germain, is an avid runner and mega-marathoner. He ran his first marathon at the 4th Marine Corps Marathon in 1979. Since then, he has finished 15 Marine Corps Marathons, completed a marathon in all 50 states, and is preparing for his 100th marathon, which will be the 40th Marine Corps Marathon on October 25, 2015. John will commemorate this event by wearing bib number 100 while running with Team Hope For The Warriors.
John became a recruit in the Marine Corps in 1978. His career has lasted over 30 years and he is currently the II Marine Expeditionary Force Operations Officer in the G-4 Logistics Department at Camp Lejeune, NC. He first connected with Hope For The Warriors® over ten years ago when he became the first volunteer at the 1st Annual Jacksonville Run For The Warriors®.
Hope For The Warriors® congratulates John on his amazing accomplishments and is honored that he has chosen to run his 100th Marathon on Team Hope For The Warriors®.
Program Information:
Secrets of Manhattan Scavenger Hunt:
Hope For The Warriors® invites you to our “Secrets of Manhattan Scavenger Hunt” fundraiser on Saturday, October 3. We’ll meet at Grand Central, and then take off on a race around Midtown. There will be a Score Tally After Party near the finish line with drinks and apps specials…and of course, prizes!
Find out more information and/or register here: http://bit.ly/1PR5plG
Team Gear:
As a member of our Team, you can save 10% on all online store items. As you train, be sure to proudly wear the Hope For The Warriors® logo so that people know the reason for your hard work. Visit www.hopeforthewarriors.org/store and use the discount code TEAMH4W.
Charity Navigator:
For the fourth year in a row, Hope For The Warriors® has received a four-star rating on Charity Navigator. This exceptional rating, achieved by only 8% of the nonprofits they evaluate, highlights Hope For The Warriors® financial responsibility to the service members, military families, and families of the fallen we support. Team members can continue to ask people to donate towards fundraising goals with confidence! We invite you to view their latest evaluation of our efforts on the Charity Navigator website.
A Warrior’s Wish®:
This year, Hope For The Warriors® will grant 11 wishes to support service members, veterans, and military families. The nature of these Wishes will vary in scope from business, fitness, financial, and outdoor-related. The enrichment process will continue long after the Wish is granted to promote stability within the lives of these heroes and their families. As the Wishes are granted we will share the stories in the upcoming newsletters. Learn more about A Warriors Wish®
For more information please contact Steve Barto at sbarto@hopeforthewarriors.org.
Rock ‘n’ Roll Series:
The Rock ‘n’ Roll race series has teamed up with everydayhero as their official fundraising platform. You can now run in any Rock ‘n’ Roll event and raise funds for Hope For The Warriors! Beginning March 1st, every race participant will be asked if they want to fundraise on behalf of their favorite cause during the race registration process. When you register and are asked to choose your charity, pick Hope For The Warriors® and you will automatically be given a Rock ‘n’ Roll everydayhero fundraising page! 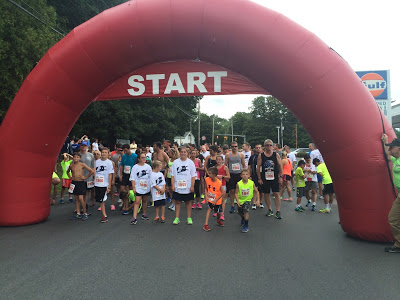