Get the Latest Updates
Facebook0Tweet0LinkedIn0Print0Email0
2,620 miles—that is enough to travel from sea to shining sea across the United States. It is also how many miles John Germain will have run once he completes his 100th Marathon with Team Hope For The Warriors®. Through his journey to 100 marathons, John has run a marathon in all 50 states, his first being the 4th Marine Corps Marathon, in 1979, and his 100th will be the 40th Marine Corps Marathon in 2015, a race with a lot of meaning to John.
John became a recruit in the Marine Corps in 1978. He began his career, spanning over 30 years, as a Private and finished as a Lieutenant Colonel. After he retiring in 2008, John was the senior Limited Duty Officer in the Marine Corps, and now currently serves as the II Marine Expeditionary Force G-4 Operations Officer at Camp Lejeune.
John first connected with Hope For The Warriors® over a decade ago in 2006 when he became the first volunteer for the 1st Annual Run For The Warriors® in Jacksonville, NC. Since then, he has participated in all ten Run For The Warriors® in Jacksonville and continues to volunteer his time and talent to the organization. 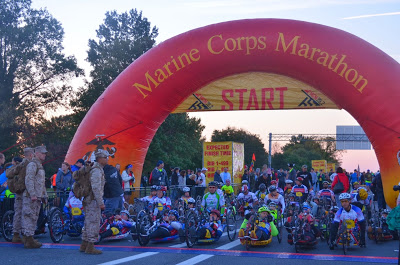 John will be wearing bib #100 in the 40th Marine Corps Marathon to commemorate his achievement.
Inspired by this story and the incredible athletic feat? Consider joining Hope For The Warriors® in Arizona to Conquer the Canyon, May 5-8, 2016. Stay tuned for more details about registration.
Also, consider making a donation today or join our monthly giving program to allow service members, like John, find restored hope through athletic accomplishments.
Facebook0Tweet0LinkedIn0Print0Email0