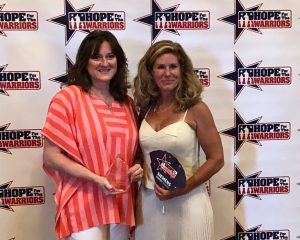 Cash-Salau was one of three Vigiano Family Hope and Courage award winners, presented by World Series champions Johnny Bench and Doug Flynn. She was recognized for her journey as a military spouse, Gold Star wife and for continuing to honor her husband’s legacy through college scholarships.

“I am grateful and honored to be recognized when I feel like there are so many other patriots doing such great work around the country in memory of our heroes,” said Cash-Salau on receiving the Vigiano Family Hope and Courage Award.

Cash-Salau married North Carolina Army National Guard Capt. Christopher S. Cash, an infantry company commander who deployed to Iraq in support of Operation Iraqi Freedom. Her life changed forever in 2004 when she received the personal visit from the National Guard’s casualty notification officers. Her husband had been killed in action during combat operations.

Cash-Salau’s resilience and desire to further her late husband’s legacy of selfless service fueled all aspects of her life. She strove to honor his sacrifice in a most public, tangible way — by organizing an event which provides scholarships to college students who emulate his character traits of selfless service and leadership.

She also created a 10-mile race, Reindeer Dash for Cash, held each December in downtown Greenville. The proceeds from each race are awarded to college students at Chris’ alma maters, North Carolina Wesleyan College and East Carolina University, and to the North Carolina National Guard Educational Foundation. To date, a total of $450,000 has been raised, and 127 students have been awarded scholarships, with a 100% graduation rate among them.

Today, she is married to retired U.S. Army Lt. Edwin Salau, and resides in Swansboro.

“Dawn devotes her life to living the legacy of service her husband left behind, but she’s a warrior in her own right,” said Kelleher. “She has turned tragedy into hope for herself and for the hundreds of people impacted by her work.”