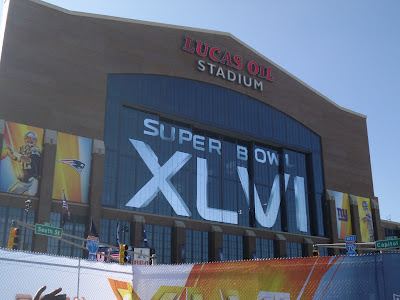 I am always amazed by the generosity of our supporters.  So many people have stepped forward to make a difference to Hope For The Warriors® and to the service members we assist.  The rest of my Super Bowl story surrounds someone who has been a longtime supporter.

As I stated in the last blog, Jim McMahon invited Kyle Moser and his family to join him in Indianapolis.  But really, a trip to this city would not be complete without going to the Big Game!  So, Hope For The Warriors® set out to make that possible.

And then there was Jim!

Jim Buckley was in the city, working with the Giants in the area of security.  I had met him earlier in the day and he hoped to meet Kyle.  Later, we were near his hotel so I sent him a quick text.  His response was to come by, he wanted to introduce Kyle to someone and give him a New York Giants cap.  Seemed like a short but fun stop to make.

We arrived at the hotel and things were crazy.  I should have realized that the Giants were all staying at this hotel and the lobby was filled with fans.  Soon after Jim found us, he and several security guards focused on introducing football players to Kyle.

One by one, coaches, managers, players and the owner himself came to Kyle, shook his hand and thanked him for his service.  Kyle was grinning ear to ear, and asking each player to sign his new ball cap.  In truth, many of the players seemed equally in awe of someone who gave so much for his country.

At some point, one of the players invited us to the private party.  And so that is how it came to be that Kyle, his beautiful wife, his father, stepfather and an overwhelmed PR Director from Hope For The Warriors® ended up surrounded by a group of very large football players.  WOW!

Kyle also met Col. Gadson, USA (Ret.), double amputee and the Giants’ honorary captain for the Super Bowl.  A great man and a true leader, Gadson and Kyle’s conversation immediately dove into subjects that only they could completely understand.  It was my favorite moment of the evening.

Not to down play the Super Bowl itself but let’s face it, most of you saw that amazing game.  Kyle and his family had a great Super Bowl experience.

Maybe I should have just posted photos and titled this blog “Kyle’s Smile Says it All.”