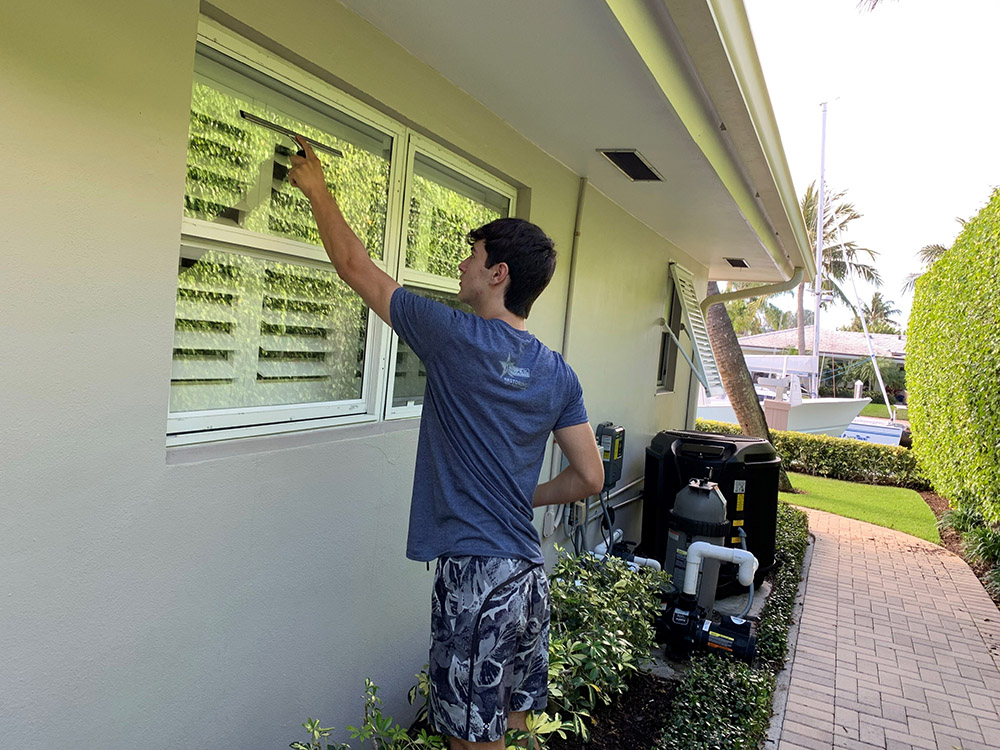 BOCA RATON, Fla. – Moved by a passion for helping others, a pair of South Florida teens have teamed up to form Washing Windows For Warriors to assist service members and veterans through the national nonprofit, Hope For The Warriors.

And despite a forced hiatus by COVID-19, the duo is back in action, buckets and squeegees in hand washing their way to a goal of raising $5,000 for Hope For The Warriors.

Like most 16-year-old high school students, Jonathan Chidiac and Derek Fletcher have a life jammed full of activities: school, soccer, cross country, clubs, and volunteering. The life-long friends – they met in church preschool – both have a deep respect for the military, its service members and veterans which drove their decision to found Washing Windows For Warriors.

“My great grandfather mostly inspired me to choose the cause of donating funds to veterans,” said Fletcher, whose great grandfather was a pilot in World War II. “Doing everything for yourself becomes repetitive and serving others gives you self-satisfaction and joy seeing that you are making a difference in the world.

“I feel as though the world needs to come together and help each other more. I am blessed and I am a prime example of the kind of teenager who should be giving back to the community.”

Fletcher began washing windows to make extra money about two years ago, but recently decided he needed to pay it forward and Washing Windows For Warriors was born.

The cost of the teens’ professional grade window-washing services begins at $50. All payments go directly to Hope For The Warriors and is tax deductible. The duo has already earned $2,225 of their $5,000 goal.

“We have several friends who have been willing to help us. The goal is to bring people together in a safe manner and educate them on why we are washing windows,” said Fletcher. “This way our friends and peers can see why they are washing windows in the hot sun and take pride in what they are doing.”

The stay-at-home order to help fight COVID-19 in South Florida sidelined the window washers for three months, but since that order was lifted the teens have been back in action.

“It has become sort of difficult to communicate with people face to face, but we are trying to sort it out so we can get completely back on track,” said Fletcher. “We’re almost halfway to our goal some hopefully we’ll reach it by the end of summer.”

Celebrating 13 years of service, Hope For The Warriors assists veterans, service members and military families with a variety of programming including clinical health and wellness, sports and recreation and transition services.

“It’s truly heartwarming to see young people like Jonathan and Derek with such respect and passion for our veterans,” said Robin Kelleher, co-founder and president of the nonprofit organization. “There are so many other things they could be doing in their free time, but they understand what the military and its service members and veterans mean to this country and the importance to support them.”

For more information on Washing Windows For Warriors email, washingwindows4warriors@gmail.com or call (305) 833-2611.

About Hope For The Warriors: Founded in 2006, Hope For The Warriors is a national nonprofit dedicated to restoring a sense of self, family and hope for post-9/11 veterans, service members and military families. Since its inception, Hope For The Warriors has served over 30,000 through a variety of support programs focused on clinical health and wellness, sports and recreation and transition. One of the nonprofit’s first programs, Military Spouse and Caregiver Scholarships, has awarded over 140 scholarships to caregivers and families of the fallen. In addition, Run For The Warriors has captured the hearts of over 27,500 since 2010. For more information, visit hopeforthewarriors.org, Facebook, Twitter or Instagram.