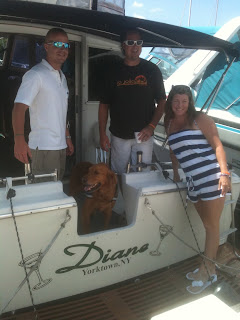 Often, the most memorable, life changing moments in our
lives come unexpectedly.  They start will
a simple idea or gesture.

The Cortlandt Yacht Club of Montrose, NY recently hosted
seven wounded service members and their families and six Gold Star Families for
a boat ride along the Hudson River.  Hope
For The Warriors® was proud and honored to be a part of this beautiful, family
event.
The idea began with a daughter asking her father if she
could invite some friends onto their boat one weekend.  Her friends included a wounded service member
and a Gold Star Family.
Her father agreed and then shared their weekend plans with
other members of his yacht club.   That
sparked more ideas, interested families and donations.   Other members stepped forward, eager to join
in the caravan of boats.  The Ossining
Elks Club offered to host a BBQ for all of the families too.
Hope For The Warriors® was called when they realized just
how many families and people that the group would be able to accommodate.  We brought seven wounded service members with
their families who lived in the area for an event that the group called “Salute
to Freedom.” 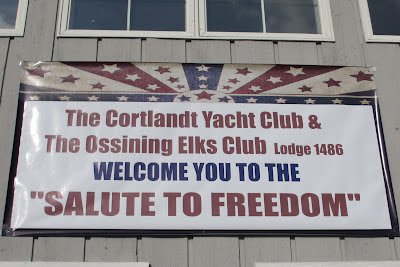 Although the event was part of our Outdoor Adventures
Program, it was also part of our Family Support Program.  Our military family members serve alongside the
service members that they love.  When a
service member returns wounded, it can impact the entire family—physically,
emotionally, financially and socially.  Our
programs are developed to address the needs of the service member as well as
the family members who support them.  The
“Salute to Freedom” could have also been called “Salute to Families.” 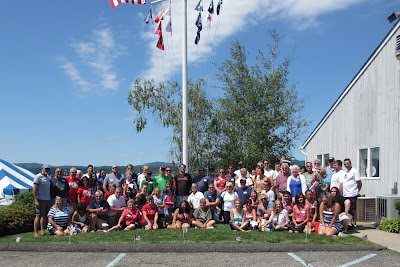 A group of boats cruised north along the beautiful Hudson
River, learning history of the area as they traveled.  They passed West Point Academy and the Wizard
of Oz castle.  (The castle from the
Wicked Witch of the West.)  Floating up
the river provided a great, new view of the area, even for families who had
lived in upstate New York their entire lives. 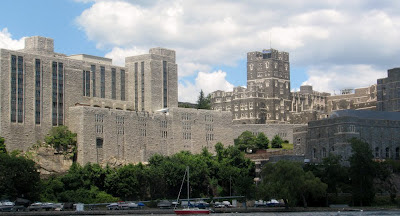 The most inspiring moment came as a complete surprise to
everyone in the group.  A friend had
asked that they float by the Newburgh Boat Show at the Riverfront Marina.  When they arrived, they saw the U.S. Coast
Guard cutter, Hawser, which was on display for the show.  As the group passed slowly, the officers and
crew of the cutter stood at attention, saluting each service member and each
family member. 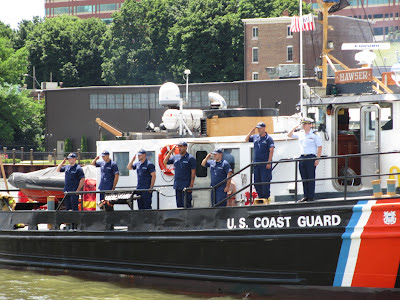 This event made a huge impact on both the families that
attended and the families that volunteered their boats and their times.  The military families all shared how special
they felt and how much they enjoyed their time in the group, socializing with
others and seeing the beautiful sights.
Some also shared the challenges they have encountered, getting out and
socializing since their service member returned home wounded.  This event provided each of the families a
day to enjoy and relax with each other, strengthening the family unit.
Giving Back

By the end of the day, it was unclear of which group was
more moved by the day—the military families or those from the yacht club that
volunteered their time and resources.
The man whose daughter started it all shared:

“Those of us who are not directly involved in the wars in
Iraq and Afghanistan seem to take for granted all the wonderful things that
make our life and our freedom so special.”
“A day with the people who have actually stood up and fought
and sacrificed for these freedoms and our way of life was the most stirring of
days.  We were all humbled by their
sacrifices and the damage to their bodies, minds and families.  We all realized just how fortunate we are and
it is all because of the men and women in this country who have put themselves
in harm’s way for our freedom and security.”
Thank you to the Cortlandt Yacht Club, their members, the
Ossining Elks Club and everyone else who made the day fun and relaxing for our
military families! 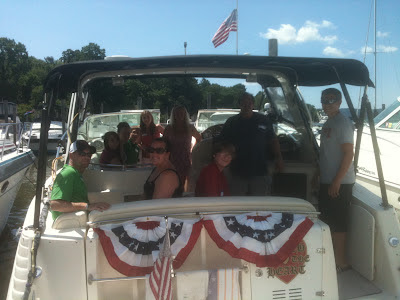