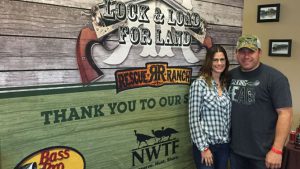 Krissie and Ryan Newman hosted more than 50 participants in the ‘Lock and Load for Land’ event to benefit Rescue Ranch.

The “Lock and Load for Land” hosted more than 50 participants in a three-stage shooting competition at The Range in Cornelius, North Carolina. With a focus on safety, Hope for the Warriors provided two retired U.S. Marines to work with participants on shooting tips throughout the competition. Additionally, Hope for the Warriors invited a group of service members, veterans and military family members from Camp Lejeune, Cherry Point and the Eastern North Carolina region to participate in the contest.

“This is a part of what everyone should have in their library of personal defense,” said Newman on Saturday, “it’s important for people to be able to defend themselves. We just want people to be safe. Part of this is education, part of this is awareness and making sure people can defend their families. So many people are scared of what can save their lives.”

Other NASCAR stars, including RCR’s XFINITY Series driver Brandon Jones, Mike and Angie Skinner, and Ray Evernham were also on hand to participate in the charity event.

“Hope for the Warriors can’t thank Ryan Newman enough for his support of our organization,” said Travis Hanson, senior director of sports and recreation at Hope for the Warriors. “His support was instrumental in the growth of our Drive For Hope program, which allowed our organization to reach countless service members to bring to NASCAR races in 2015.”