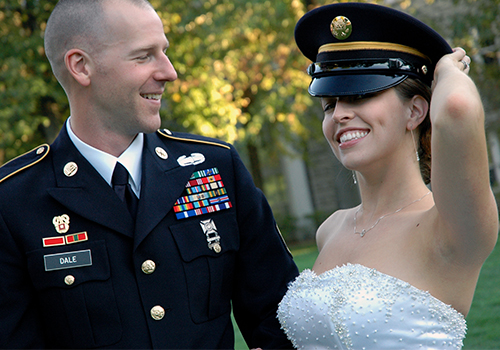 Sarah and John Dale had an arranged marriage of sorts. In 2004 her father, a university professor, decided to introduce her to one of his students. Sarah was not looking for a life partner at the mere age of 19, but when she met John, they immediately hit if off and had an instant connection.

They had a fast summer romance, made extra fast because at the end of the summer, John left for training with the 42nd infantry division at Ft. Drum, New York, as they prepared to deploy to Tikrit, Iraq. 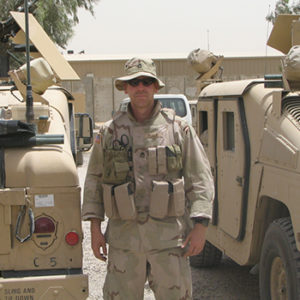 They stayed connected by writing old-fashioned letters and sending audio and video tapes back and forth through the mail (no one had an iPhone back then).

In 2005, John luckily returned from Iraq happy to be home and in one piece. He found work as a firefighter and emergency medical technician (EMT). Yet, once the homecoming jitters settled and the adrenaline of combat wore off, the fog set in.

“At one point it was like the light had gone out within him. He had a glazed-over look to his eyes. I fought so hard to get him out of that state because it was lonely while he was trapped behind that fog.” 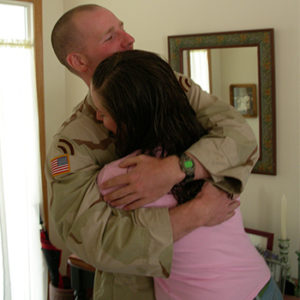 Desmond Tutu once said, “Hope is being able to see there is light despite all the darkness.” In 2014, Sarah found Hope For The Warriors and it was the beginning of the end of darkness in her life.

First, she learned to love herself again.

While fighting for answers and the care her husband desperately needed amidst their marriage falling apart, Sarah was so consumed that she forgot to take care of herself.

Poorly nurturing her body, a lack of exercise, too much work and overall lack of self-care created a perfect storm of anxiety and depression. That is wh 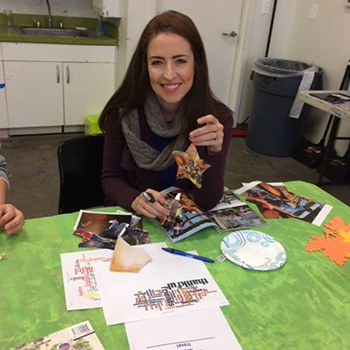 en she made a decision that she considers “life altering” … Sarah attended her first HOPE caregiver workshop.

Shared time with other caregivers made Sarah realize she wasn’t alone and that she wasn’t okay. It was at this workshop that she learned of secondary PTSD or compassion fatigue, a condition where the caregiver experiences mirroring symptoms as their spouse with PTSD. Above all, this experience empowered her to get help.

Today, she marks the HOPE caregiver workshops as the turning point in her life. Hear more about Sarah’s experience at the workshops by listening to her 5 Reasons to Attend a Caregiver Workshop.

Then she found her voice.

Having a career in marketing, Sarah has always had a knack and thirst for creativity. Looking to further this passion, Sarah applied and was awarded a HOPE Military Spouse and Caregiver Scholarship, twice, to pursue her Master’s in Fine Arts at American University. Studying the work of artists like Kara Walker, Sarah realized that her pieces were inspired by deeply personal matters. She pushed her ideas to the fullest potential, digging deep into her subject matter because that’s what makes great art.

For Sarah, that subject matter was being an angry Army wife.

She poured her emotions into pieces like “The Pentagon” or a performance piece, “Support The Troops” in which she dressed like a fifties housewife and carried around her husband’s box of old Army gear – a box they carry with them their whole lives. You can view these pieces here.

It was through art that she was able to release the frustrations of the struggles she and John had been experiencing as they tried to get help from the Veterans Administration (VA), and dealt with his PTSD and her secondary PTSD.

“It takes vulnerability to share difficult moments with the world, but I can tell you that we experience healing every time we share our burdens because we are no longer the only ones carrying them.” – Sarah Dale

Last, but not least, she and John fell back in love. 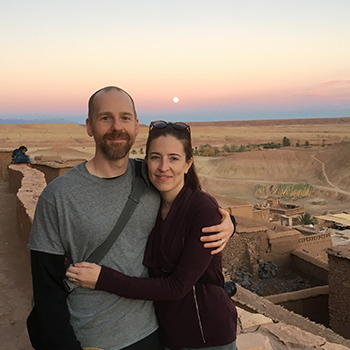 PTSD caused John to push Sarah away. He experienced angry outbursts, anxiety, depression and controlling behavior that turned their house built on love into a warzone. After fighting so hard to lift the fog, the couple decided to surrender their marriage and separate.

They began the divorce process in Virginia and started talking to lawyers. But then a friend of hers told her about a marriage workshop she’d heard worked miracles. Sarah didn’t feel like she could walk away until she had tried everything. So she asked John if he’d go to the workshop with her and he agreed.

It was a weekend workshop by Jon and Joanna Anderson of the Growing Love Network, called a Love Reboot. It wasn’t an easy weekend. They had very deep hurts to face and heal. But they diligently put the Anderson’s guidance into action one step at a time after they got home.

They decided instead of continuing to listen to fear, to be brave and choose love. 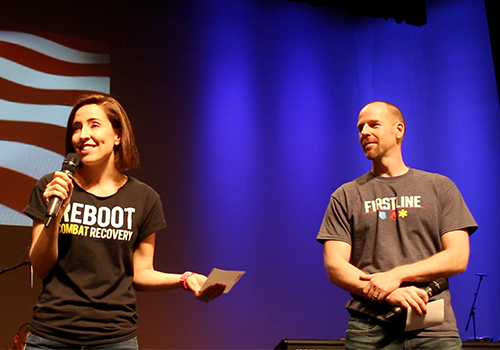 Those two words shaped and defined their future. From that day, they have worked together to pay forward the support they have received and give hope to other military couples facing the fog.

Today, John and Sarah are living their lives PTSD free. Together, they founded Brave Love TV to help couples overcome their fears and rebuild their relationship.

This February Hope For The Warriors has partnered with Brave Love TV to help couples overcome their fear of having tough conversations with their spouse and what question couples should be asking each other to work toward a resilient marriage. Stay tuned for this video series on Facebook, Instagram, and our blog.