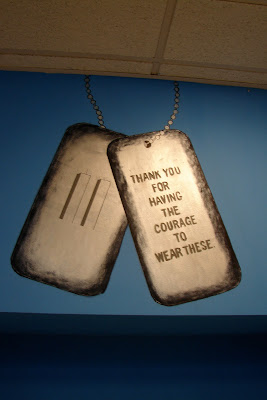 Operation HEArt—Honoring
and Empowering through Art
Hope For The Warriors® is honored to work with William McKinley IS 259, a
middle school in Brooklyn, and their project, Operation HEArt.  Veterans and military families talk to the
students, sharing their experiences and helping our future adults understand
everything that our military members give for their freedoms.  After they meet these heroes, the students
contribute to a mural at the school.  On
Tuesday, May 21, 2013, that mural will be unveiled to the public.
Hope For The Warriors® has invited veterans and family members that we
have worked with in the New York City area.
As we approach the unveiling, Cindy Paauw, Masters of Social Work intern
with Hope For The Warriors® will share the stories of some of our guest speakers
and their interaction with the students. 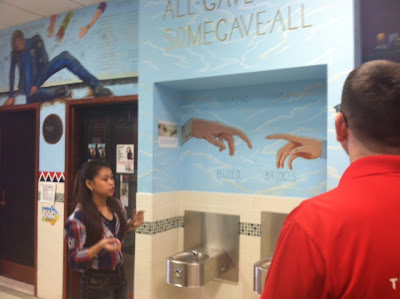 Staff
Sergeant Kevin Snow, USA
“On February 14, 2013, our featured
speaker was veteran Kevin Snow.  Kevin
served in the Army for 10 years, from 1999-2009 and deployed twice. On October
2007, a mortar landed five meters from Kevin while he stood in the chow
line.  He was severely wounded and next
to him, a fellow service member was killed. Kevin now has a traumatic brain injury,
PTSD, and a torn left eardrum. He has five children, and a devoted wife,
Adrienne, who joined Kevin on the day of his visit.”
“Kevin’s visit to the school was heart
riveting and emotion evoking for the students and faculty. He confided to me
that he was nervous but when he started speaking to the students, the nerves
must have disappeared. He spoke with great confidence and told his story
eloquently, with great sensitivity. As he recounted that fateful day, he became
emotional, admitting that he felt a sense of survivor’s guilt. This is not
uncommon among military personnel. Kevin still thinks about the female soldier
standing next to him in line who did not make it home back to her husband and
two young children. She was five hours short of boarding her plane that day to return
home after serving a 14-month tour.”
“Sometimes I think it should have been
me,” Kevin said.
“As Kevin revealed his raw emotions,
there was a pause in his speech, and tears ran down his face. As I looked
around the room, there was a flood of empathy, as tears had filled many of the students’
eyes.”
“Adrienne also shared her story when
she received news of Kevin’s injury. She stated that she knew, when the army
chaplain knocked on her door while they were stationed in Ft. Riley, Kansas.
That morning in late October 2007, she knew that things would never be the same
again.”
One student
asked, “What is it like to be a wife of
an injured veteran?”
“Adrienne shared that she feels proud,
and she would not ask for any other life, in spite of the many challenges she faces:
full time caregiver to her husband, and raising five children, four of whom
have special needs. Both Adrienne and Kevin expressed a great sense of hope for
their future.”
“The reintegration process is a long one, it
is still something that myself, and my children, particularly my oldest one,
continues to deal with,” Adrienne said.
“We know that Kevin will not be the father/husband that he was once before, we
have to accept this, and embrace the person he is now.”
“Knowing that you had all of these injuries
as a result of the war, is joining the Army something that you regret?”  One student asked.
“I never will regret my decision, if I could
I would still be serving, and willingly perform all the duties I had done in
the past,” Kevin said. “The army has
become part of my identity, part of who I am, something that I am proud of, and now knowing all the wonderful things
you all are doing here—in creating these murals, I know that I served for a
purpose—I want to thank you all for this.”
“At the end of his presentation, Kevin
surprised everyone when he donated his silver memorial bracelet. The name of
his best friend who was killed in action is engraved on the bracelet. For
years, Kevin has worn this bracelet every day, never taking it off.  But on this day, he handed the bracelet over
to the school and to the students so that it could be integrated into the mural.”
“After the presentation, Kevin was
guided by the artists to the mural, and was given a paintbrush to use. Kevin
and his wife became an integral part of the mural that day.  In the years to come, the students might
forget his name or the name of those he served with.  But they will never forget the story of his
sacrifices or the sense of hope that was shared.”
Last year, William McKinley IS 259 painted murals to remember 9/11 and honor those lost.  View photos of the mural and the unveiling here.
FacebookTweetLinkedInPrintEmail