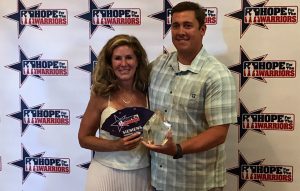 Dove was one of three Vigiano Family Hope and Courage award winners, presented by World Series Champions Johnny Bench and Doug Flynn. He was recognized for his service and advocating for his fellow wounded service members.

“It’s such an honor to be recognized by Hope For The Warriors,” said Dove on receiving the Vigiano Family Hope and Courage Award. In my recovery I have tried to raise awareness for the wounded warrior community and amazing organizations that support us. Hope For The Warriors has made a tremendous impact on both my personal recovery and that of countless others. I am truly humbled to receive this honor.”

Medically retired, Dove enlisted in the U.S. Army in 2008. He completed Infantry and Airborne at Ft. Benning before starting the Special Forces Qualification Course at Ft. Bragg. He earned his Green Beret in 2011. In 2012, Dove was deployed to Afghanistan where he was involved in an IED blast while driving a dirt bike on a combat patrol. He suffered amputations of his dominant leg and hand, as well as many other life-threatening injuries.

Dove completed seven months of rehab at Walter Reed before returning to active-duty and serving on portion of a non-combat deployment 12 months post injury. After, he worked with other wounded service members of his unit before medically retiring from the Army in July of 2014.

Post retirement, Dove has filled many roles including fishing guide, business owner, speaker, as well as great involvement with veteran nonprofits and advocacy. He credits his love of the outdoors as a driving force to overcoming the obstacles presented to him since his injury. In Dove’s free time, he enjoys hunting, fishing, archery, and golf. Most of all, he attributes his success to his loving and supportive wife and two children.

Bobby is the definition of tenacity. I’m in awe of his determination over the years, and how he’s turned his passions into a business,” said Kelleher. “He inspires others who are facing adversity to not give up hope.”