National Guard Veteran Gets Once-In-A Lifetime Hunt, Thanks To Hope For The Warriors 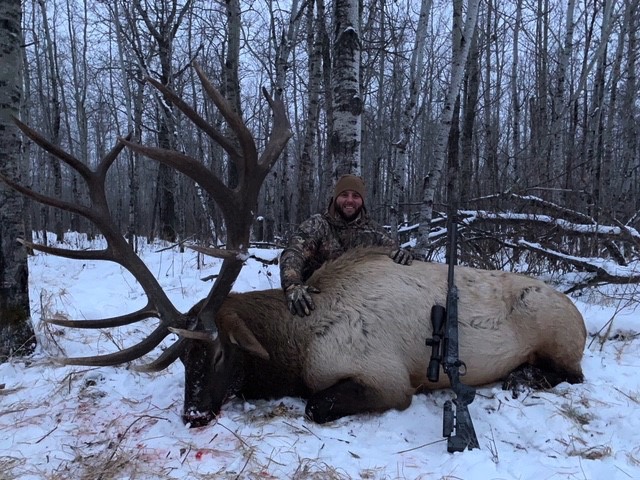 SPRINGFIELD, Va. (February 22, 2019) – An invitation to a hunting expo gave Georgia Army National Guard veteran Corey Speck the hunt of a lifetime and a trophy bull elk to prove it.

Speck was invited to a Buckmasters hunting expo a year ago by Hope For The Warriors Director of Outdoor Adventures Ken Sutherby. He was awarded a Buckmasters Life Hunt for whitetails while he was there and talked about the possibility of additional unique hunting trips in the future.

“Ken mentioned that sometimes very rare hunts will come up and he would let me know down the road if I could ever participate in one,” recalled Speck. “I never thought I’d find myself in another country hunting such an amazing animal and then bringing home a world-class elk.”

That call from Sutherby came, and soon Speck was on his way to Canada.

Speck began hunting just a couple of years ago, and until the Canada trip, it had mostly been for deer close to his home in Hoschton, Ga., located north of Atlanta and the Buckmasters Life Hunt. The Canada trip was an eye-opener for him.

“This elk hunt was amazing. I’ve never been to Canada so that alone was great,” Speck said of his trip to Saskatchewan. “An elk was on my bucket list; it’s probably on every hunter’s list. But actually, getting the chance to go shoot one and it being such a trophy, it was life changing.”

The elk was truly a once-in-a-lifetime trophy, weighing in at almost 1,200 pounds, scoring 412 and was the highlight of the trip for Speck, his guide Ryan McLennon of Backcountry Outfitters and Jered Joplin, owner of American Precision Arms in Jefferson, Georgia.

Speck spent almost 10 years in the Georgia Army National Guard and served two deployments to Afghanistan. During the first tour in 2009 he was part of a 14-man team that trained and fought alongside members of the Afghan National Army. He was involved in more than 250 combat missions and awarded a Bronze Star with Valor for his lifesaving actions in a mission alongside Polish troops.

Speck was featured in a Polish made documentary for his heroic actions and will be honored by Poland this March.

Founded in 2006, Hope For The Warriors is a national nonprofit dedicated to restoring a sense of self, family and hope for post 9/11 veterans, service members and military families.

Hope For The Warriors created the Outdoor Adventures Program in 2010 to provide adaptive opportunities for wounded heroes to participate in sporting activities in the great outdoors. In 2012, the organization recognized the therapeutic benefits for family members and expanded the program to include spouses and children of wounded and fallen service members.

Joplin, like Speck, is from Georgia and invited the veteran to make the long drive with him to Canada. That decision made it much easier for Speck to transport a freezer full of elk meat back home.

“Now my fiancé and I have over 250 pounds of elk meat in the freezer and it tastes absolutely amazing,” said Speck. “I’ve been able to share it with friends and family and tell the story with so many people. I’ve definitely joined the hunting community now.”

Founded in 2006, Hope For The Warriors is a national nonprofit dedicated to restoring a sense of self, family and hope for post 9/11 veterans, service members and military families. Since its inception, Hope For The Warriors has served more than 19,000 through a variety of support programs focused on clinical health and wellness, sports and recreation and transition. The nonprofit’s first program, A Warrior’s Wish, has granted 200 wishes to fulfill a desire for a better quality of life or support a quest for gratifying endeavors. In addition, Run For The Warriors has captured the hearts of more than 25,500 since 2010. For more information, visit hopeforthewarriors.org, Facebook, Twitter or Instagram.