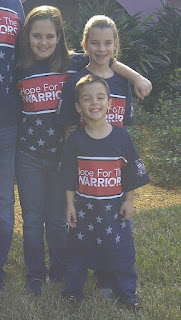 Meet Kelly and Brooke, both 11, and Devin, 5 years old.  Their father is in the Marine Corps and they have spent their entire lives following their Dad’s career.  Their Mom is a director for Hope For The Warriors® and was one of the original volunteers when the organization started in 2006.

The kids had a great opportunity this year.  They attended the Disney Marathon and Half Marathon in January with their parents and members of Team Hope For The Warriors®.  They were excited to meet real life heroes–Manny and John, two wounded service members who competed in the marathon and half marathon.

The kids decided they wanted to do more.  The family lives in the Tampa area, home to the popular Gasparilla races.  Their Dad heads up Tampa Team Hope For The Warriors® and the Team participated in the half marathon that weekend. The two girls motivated a group of their classmates to run the Gasparilla 5K race in honor of Manny and John. They had fun and honored our heroes!

If you have a great military child that has supported Hope For The Warriors®, please let us know!  Send photos and information to Anne Woods.﻿﻿﻿