Mary Nicholson: The Brave Love of a Fearless Mother

March is Women’s History Month, so today we highlight an amazing woman, mother, and recipient of this year’s Hope & Courage award: Mary Nicholson.

Mary Nicholson is the mother of two sons; Andrew, and Michael. Her younger son, Sgt. Michael Nicholson, joined the Marine Corps one year after graduating high school. He was stationed in Hawaii and in April 2011, deployed to Afghanistan.
Mary’s volunteer service started when Michael’s military service began.  She created a Military Ministry at her church. The group was formed to provide support to servicemen and women by creating care packages and helping their families.  But it was also a support group for the military — no one can really understand what a military mother goes through, except another military mother.
On July 5, 2011, Mary volunteered at a funeral reception for a fallen service member, though the Military Ministry.  The very next morning, two Marines rang her doorbell. Mary peeked out the window, saw the sharply dressed Marines, and refused to answer the door. Somehow, she thought, if she didn’t open the door, it wasn’t true.
Finally, she opened the door. The Marines quickly said “He’s alive.”
But he had been critically injured. Michael had lost his right leg entirely, his left leg above the knee, and his left arm. 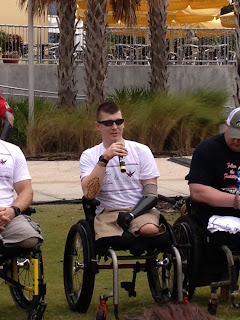 Mary, her husband John, and their son Andrew traveled to Walter Reed Military Medical Center to see Michael.  The medical center would become her new home for the next nine months as Mary supported Michael’s rehabilitation.
While staying with Michael, Mary began volunteering and took on an active role to help other families.  She was part of both the Walter Reed National Military Medical Center Wounded Warrior Advisory Committee and the Joint Task Force Wounded Warrior Family Care Committee.  Through this work, Mary joined other parents in identifying the needs of the family members while the service member was receiving medical care.  She also supported other families by putting together family care packages for the family’s first days at the hospital.
Mary stayed at the medical center for nine months and returned home to Tampa the following Spring.  After only two months at home, her husband John was diagnosed with cancer.  Mary now found herself caring for two men in her family; her son Michael, slowly adapting to his new life as a triple amputee, and her husband John, who insisted on working through all his cycles of chemotherapy.
In the face of all these challenges Mary has remained poised, strong and positive; seamlessly balancing the unwavering love of a mother, while not coddling her grown Marine son because of his injuries.
Michael will soon return to Tampa and await his new “Smart Home” to be completed. Mary is volunteering for Hope For The Warriors® and the Spouse/Caregiver Scholarship. Mary is thankful for the support the Nicholsons received during their darkest hours. She is dedicated to giving back to all those people who helped and supported her family through this life-altering ordeal.
Facebook0Tweet0LinkedIn0Print0Email0