Get the Latest Updates
FacebookTweetLinkedInPrintEmail
Today’s blog is written by Anne, a member of Team Hope For The Warriors® who just completed the Marine Corps Marathon.  She shares why she joined the Team and what the marathon meant to her. 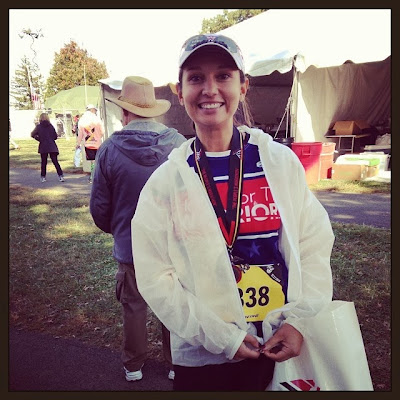 When I
started running, I never thought that I would be a marathon finisher less than
two years later. Training for and running a marathon has been one of the
greatest times of my life and Hope For The Warriors® played a huge part in the
experience.
In June of
2010 my cousin, Marine Sgt. Brandon Bury, was killed in Afghanistan while on
his third combat deployment. His death came as a shock to our family who was
blessed to see him for the last time just weeks before.
I became
aware of Hope For The Warriors® the at the 2012 Kingwood Fallen Heroes Golf
Tournament held in Brandon’s hometown of Kingwood, TX. I had started running
and was training for a half-marathon. I remember going out on a training run
from the hotel in Kingwood and on the same streets where Brandon grew up. From
then on I have always seen Brandon as an inspiration for my running.
By the spring
of 2013, I had run five half-marathons and it was time to take the step up to a
full marathon. Running has been such a blessing in my life and I wanted to use
it as a way to give back. I wanted to run in honor of Brandon. It had to be the
Marine Corps Marathon and I had to use it as a way to help wounded service
members and families of the fallen. After the bombings at the Boston Marathon
on April 15th I decided to face my fears and I emailed Hope For The
Warriors® just a few days later to inquire about running as a part of Team Hope
For The Warriors®.
For
18 weeks I trained through the summer in preparation for the race, motivated by
the chance to use it as a way to bring awareness to the Hope For The Warriors®
mission of restoring self, family and hope. People responded with overwhelming
support of my running and my choice to fundraise for such a great charity. As a
part of Team Hope For The Warriors®, I had access to tools and information that
helped me become the top fundraiser for the event and that kept me motivated
during my training. I made it to the start line of the Marine Corps Marathon
with the feeling that this whole experience was truly more than a race.
Whenever I
ran across another Team Hope For The Warriors® runner along the course it was
awesome to share words of encouragement and a high-five. I had a Team member
come from behind me saying he saw my jersey and he pushed until he caught up
with me. Even though we hadn’t all met each other, let alone trained together,
it truly felt like we were part of a team.
On October 27,
2013 I crossed the finish line at the Marine Corps Marathon at the Marine Corps
War Memorial wearing a Team Hope For The Warriors® jersey and Brandon’s name
pinned to my back. 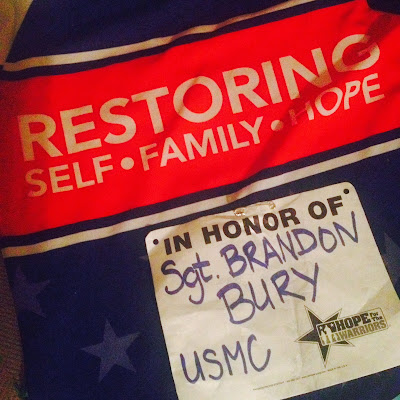 During the
race, a Marine also running stopped me and told me he knew Brandon and was
there with him in Afghanistan the day he died. This was something so special
and my family and I will cherish this connection forever. I was truly in the
right place at the right time.
It was because of Team Hope For The Warriors®
I had the opportunity to run the Marine Corps Marathon and experience all these
great things. Long after crossing the finish line, I continue to be inspired by
the events of that race day, my Hope For The Warriors® teammates, and the
mission of restoring self, family, and hope to service members and their
families.
Learn more about Hope For The Warriors® and our programs
Donate to Anne’s Donation Page
FacebookTweetLinkedInPrintEmail