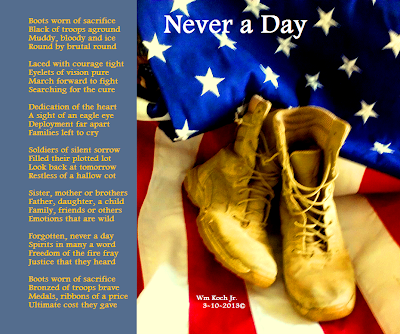 Operation HEArt—Honoring and Empowering through Art

Hope For The Warriors® is honored to work with William McKinley IS 259, a middle school in Brooklyn, and their project, Operation HEArt. Veterans and military families talk to the students, sharing their experiences and helping our future adults understand everything that our military members give for their freedoms. After they meet these heroes, the students contribute to a mural at the school. On Tuesday, May 21, 2013, that mural will be unveiled to the public.

Hope For The Warriors® has invited veterans and family members that we have worked with in the New York City area. As we approach the unveiling, Cindy Paauw, Masters of Social Work intern with Hope For The Warriors® will share the stories of some of our guest speakers and their interaction with the students.
Gold Star Father–William Koch
It was a very snowy morning when Bill Koch presented to
the school. Bill and Christine Koch are Gold Star parents residing in the New
Jersey area who have been part of Hope For The Warriors® family for several
years now. They lost their son Cpl Steven Koch, USA when he was serving in a
combat mission in Afghanistan with the 82nd Airborne Division on
March 3, 2008. Steven left behind his parents and his two older siblings;
brother, Bill, and sister, Lynne.  Bill’s
visit to the school was only days after the fifth anniversary of Steven’s
death.

In May 2010, the Koch family faced another tragedy, losing
their daughter Lynne.  She had struggled
with depression since her brother’s death. As Bill described, “she was not the same person ever since she
lost her brother, Steven.  The two had
such a close bond, she could not take the pain any longer.”

On the day of Bill’s presentation, three eighth grade students
who are both artists and poets contributing to the mural, gave Bill a
comprehensive and narrated tour of the previously completed 9/11 tribute mural,
and the current mural. 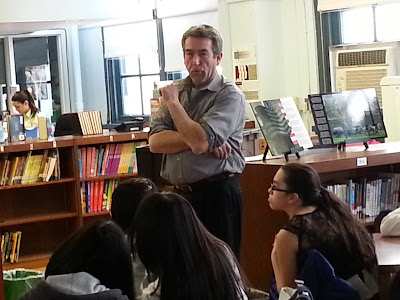 Bill’s presentation in many ways mirrored the middle
school students’ own project.  Just as
the students are using the mural to express their emotions and tell a story,
Bill expresses his sorrow and pain through poetry.  Common themes included: courage, love for
country and family, and sacrifice.

Bill’s presentation went through the editing process of one
of his published poems and included a poignant slideshow conveying a select
collection of the poems that he has written, accompanied by images and artwork
that further captured the emotions and meaning behind the words. 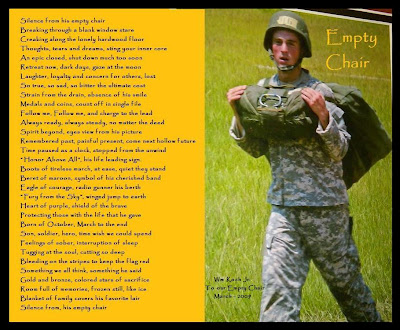 Bill flipped through the five edited versions of the
poem, “Empty Chair,” and Bill explained to the students the arduous process of
editing work to be published.

“When you think you
have created a wonderful piece of work, and to then have sections of it crossed
out, and commented on, it’s hard, but that’s the reality of the editing process.”

Mr. Buxton, who has taught language arts at the school
for many years, and who has most recently worked with the students in creating
corresponding poetry to be a part of the mural, chimed: “I know some of you agree. I know because, I have been that mean editor
that Mr. Koch is talking about, when I return your poems with red pen marks
scribbled all over it.”

Students asked how they could get their work published,
often a difficult and challenging task in itself.

“Don’t give up and
get discouraged.  Have a cause—an
issue/topic you are truly passionate about; start by presenting your work to a
smaller audience, social media is a great way of getting your work out there—I
did this, not having any prior experience in writing, but the point is, never
give up and stop writing, get your voice/message heard.”

The students attentively watched the slideshow
encapsulating the meaningful messages of Bill’s prolific poetry.  Despite their age, the students had a very
deep understanding of the messages within the poetry.  One of the students asked:

“One of the themes
of this mural is ‘love involves sacrifice.’
After listening to your story and the series of tragedies that you went
through with your family, do you think this is true?”

Bill paused for a moment before he responded.

“Love involving sacrifice?
Yes, the statement you make is one that resonates with me, my family, my son,
and my daughter. As you all have read in my poem ‘Empty Chair,’ the line
‘bleeding on the stripes to keep the flag red…something we all think, something
he said’, this was a sentiment that Steven truly believed in; he loved his
country, and chose to fight for this great nation, and the freedoms that we as
a nation enjoy. He was willing to sacrifice his life for his country.”

Bill’s ended his presentation, elaborating the importance
of finding meaning in loss, and his journey of recovery from a deeply sorrowful
state. Though Bill shared that he and his family will never entirely recover
from the pain they felt losing both Steven and Lynne, it is important to find
an outlet where one can feel a sense of comfort, and endless support. He and
his wife Christine have become active within the Gold Star community, and through
various events and programs through organizations such as Hope For The Warriors®.
His newfound passion in writing and the publishing of his many books and poems
serves as a continual source of catharsis.

“I
write whenever any source of inspiration hits me. My poem, ‘Queen of Hearts’ (dedicated
to Lynne) was written on a napkin at a restaurant. I make it a point to record
any burst of emotion/inspiration that I get”.

At the end of the presentation, Bill was presented a card
that was made and signed by all of the students/mural artists present that day,
thanking Bill for his courage and for sharing his story. In return, Bill gave
the school two plaques of his poems; one about Steven, and another one about
Lynne, and a books that were recently published. These items will be displayed
in the glass cabinets as part of the mural.  The legacy of Cpl. Steven Koch, USA KIA, and
his sister, Lynne Koch, will live on as part of the mural at IS 259 for many
years to come.