LOCAL VETERANS RAISE MORE THAN $9,000 TO SUPPORT HOPE FOR THE WARRIORS 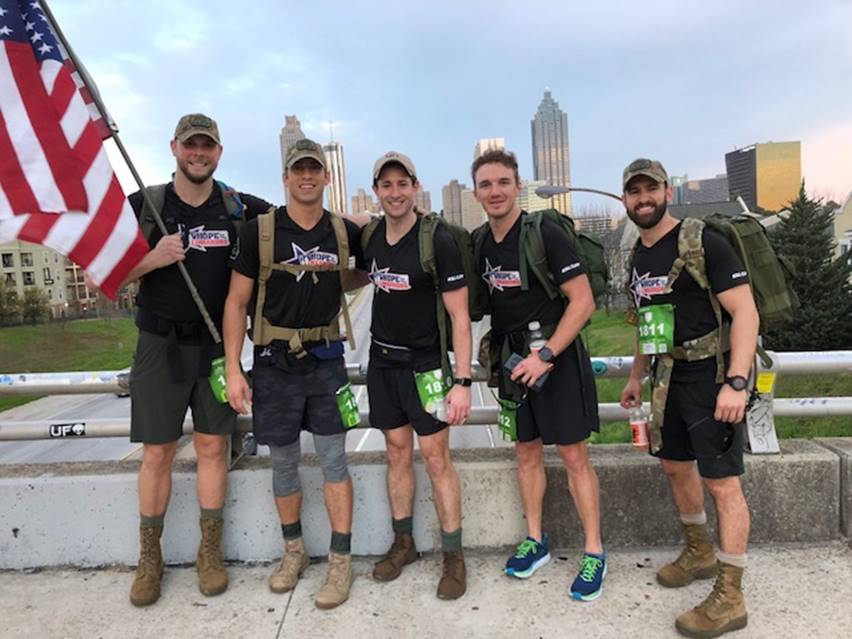 Raising more than $9,000 for the national nonprofit Hope For The Warriors, the five veteran friends completed the 26.2 mile course wearing 45-pound rucksacks and combat boots.

The group stated that they came together to immortalize the courage, bravery, and self-sacrifice of those that serve, have served, and those that paid the ultimate sacrifice for our country. To the veteran athletes it was more than just a physical test. It bridged the gap between the body and the mind, emotion and experience, and gave them the opportunity to sweat, bleed, suffer, and grieve for their fallen comrades – one mile at a time.

“We are all pretty fit guys and love a challenge,” says Army veteran Springer. “The race was both terrible and beautiful. We decided before our start that we weren’t going to leave each other. We hung tight and weathered the storm. We got to the end and all agreed that it was one of the worst things we’d ever done, but again, so thankful that we were brave enough… check, dumb enough, to have actually pulled it off.

“We committed to carrying 35-pound rucksacks, but upon further inspection, we each ended up carrying approximately 45 pounds. The lesson learned is, I think, we are capable of so much more than we think we are, and we are capable of doing great things, we just have to be willing to sacrifice a little,” added Springer.

Celebrating 11 years of service, Hope For The Warriors assists veterans, service members and military families with a variety of programming including transition services, clinical health and wellness, sports and recreation and community development and engagement.

“When Hope For The Warriors started 11 years ago, we dreamed of veterans supporting veterans and contributing to our initiatives,” said Robin Kelleher, co-founder and president of the nonprofit organization. “Most importantly, these young men are truly impacting the well-being of the many veterans, service members and families who have bravely served and sacrificed for our country.”

Founded in 2006, Hope For The Warriors is a national nonprofit dedicated to restoring a sense of self, family and hope for post 9/11 veterans, service members and military families. Since its inception, Hope For The Warriors has served more than 19,000 through a variety of support programs focused on transition services, clinical health and wellness, sports and recreation and community development and engagement. The nonprofit’s first program, A Warrior’s Wish, has granted 182 wishes to fulfill a desire for a better quality of life or support a quest for gratifying endeavors. In addition, Run For The Warriors has captured the hearts of more than 23,500 since 2010. For more information, visit hopeforthewarriors.org,Facebook or Twitter.