Legacy of Hero Remembered by Team Hope For The Warriors® Member

After many months of training and fundraising, Team Hope
For The Warriors® member, Nick Iacono, raised around $5,000 in honor of Staff
Sergeant Michael Ollis in the 2015 United Airlines NYC Half Marathon. Nick
alone was able to fundraise five times the required amount and went above and
beyond to help Hope For The Warriors® in their mission of restoring self,
family, and hope for all military families.
Nick met Michael’s family through his work in the office
of his hometown Staten Island congressman, a Marine combat veteran himself. In
2013, Nick had the privilege to welcome the Ollis family, including Michael’s father
Bob, mother Linda, and sisters Kim and Kelly, to the congressman’s office in
Washington, D.C., where he gave them a tour of the Capitol. Inspired by
Michael’s story, Nick was determined to contribute to the efforts to preserve
Michael’s memory and heroic sacrifice.
Staff Sergeant Michael Ollis of Staten Island, NY,
served with valor and honor through his time in Afghanistan. On August 28, 2013,
Michael sacrificed his own life and saved a Polish service member, Karol
Cierpica, from a suicide attack. A year later, the Cierpica family announced they
were expecting a baby boy and planned to name their son after Michael Ollis.
Michael’s parents were able to go to Poland to visit with the Cierpicas
and meet with Polish dignitaries, including the president, prime minister, and
military leaders. In January of 2015, Michael Cierpica was born and will
carry on the legacy of Michael Ollis. 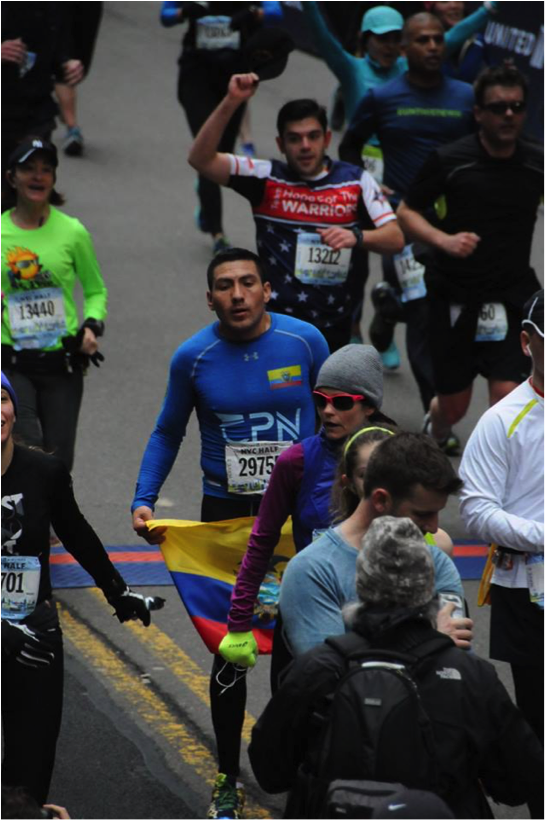 Knowing Michael’s story and being an involved member of
the Staten Island community, Nick desired to continue his memory. “Michael
truly embodies, to me and to so many Staten Islanders, the very definition
of a hometown hero, and even more than that, an American hero,” said Nick. “I
think that his astounding bravery and sacrifice for our freedom—which is also
borne by his family—deserves recognition and remembrance. So, the decision to
dedicate my run to him and his memory was an easy one.”
Nick became hooked on distance running after a friend
encouraged him to train and run in the Staten Island Half in October 2014. The
2015 United Airlines NYC Half was his second half and he plans to do more
distance races both in New York and Washington, D.C.
Nick ran a successful NYC Half on Team Hope For The
Warriors®, and said, “I cannot express how grateful I am to Hope For The
Warriors® for giving me an opportunity to honor Michael’s memory while at the
same time supporting our country’s best and bravest.”
Hope For The Warriors® stands with Nick in honoring
Staff Sergeant Michael Ollis and his family, and would like to thank Nick for his
amazing contribution and dedication to military families.

On April 26, 2015 Hope For The Warriors® presented Nick with a certificate for his fundraising efforts  at a V.F.W. event honoring Michael Ollis.