It is our greatest honor to highlight Stirling Collins as HOPE’s July 2021 Volunteer of the Month. 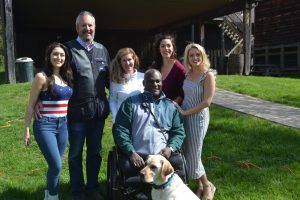 Stirling Collins (back left) with Robin Kelleher, HOPE President and CEO, and Colonel Greg Gadson and guests at the 2021 Clay Shoot.

Stirling, President of Business Development at Champion Elevator, was introduced to and joined our HOPE family in 2010 through the late HOPE board member Harry Bridgwood.

He quickly became a dependable advocate of HOPE and has grown his support through the annual clay shoot event he spearheads at Orvis Sandanona in Millbrook, N.Y. This past spring, the 10th anniversary of this event raised more than $68,000, totaling over $470,000 raised over the past 10 years. Beyond the Clay Shoot, Stirling continuously advocates for HOPE’s mission and joins us at various events in the New York region. He has also volunteered for and supported HOPE’s Military Spouse and Caregiver Scholarship Program.

Emma Walsh, HOPE’s Chief People Officer who nominated Stirling for this honor, shares, “Stirling has been a loyal and dedicated supporter and voice of HOPE over the last decade. He is a truly humble and selfless man whose uplifting spirit makes him a pleasure for me and HOPE staff to work with!”

Thank you, Stirling, for always going above and beyond for HOPE and sharing our mission in your community!