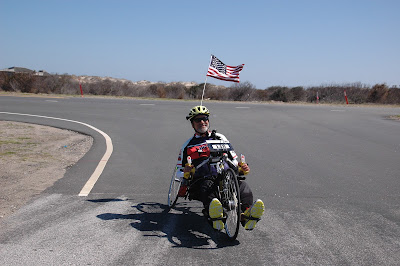 Paul and
Sally Kelly have been volunteers for Hope For The Warriors® since 2007.  Theirs is a story of inspiration–how they
have inspired others and how others have inspired them.

Their story
of inspiration begins about the same time as does the story of Hope For The
Warriors®, in 2006.  It begins with
Paul’s niece Tracie, who was a graduate student in Washington DC.  Paul and Tracie were having dinner one
evening when he was on a business trip.

“I think I can do that”
Paul never
considered himself an athlete but had always enjoyed the outdoors–hunting,
hiking, backpacking, canoeing, swimming, and bicycling–until at the age of 22
when he broke his neck in a swimming pool and became a quadriplegic.  He has lived with the paralysis since.  In spite of his condition he maintained his
fitness by pushing his wheelchair whenever he could.  It is a difficult task with his level of paralysis,
“Most quadriplegics at my level of injury will just use a power
wheelchair,” Paul points out.
Then, at the
age of 50, he and his niece looked out the window of the restaurant over the
Potomac River and he pointed out the distance of a “walk” he and Sally
had taken through the waterfront district of DC.  “I didn’t tell her it took me all
day,” he jokes.  Tracie was inspired
by the story and a few short weeks later, announced that she had registered for
the Marine Corps Marathon.
That October Tracie
returned the inspiration to Paul.  He sat
at the one mile mark of the marathon, waiting to see her run past.  But first, he saw the crank-wheelchair
racers.  “I had never seen the
crank-chairs race in a marathon before.
I never considered doing a marathon because pushing a wheelchair
requires the use of many of my paralyzed muscles.”  That was his moment of inspiration.  Under his breath he said, “I think I can
do that!”  The crank-wheelchairs
require different muscles; muscles Paul could use. 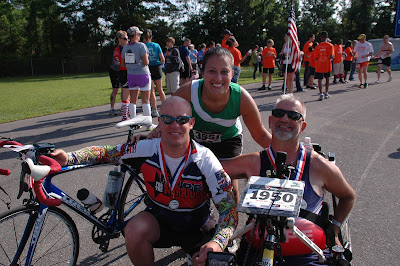 2008 Miles of Hope
As Paul
trained he told Tracie and Sally, “We need a cause.”  In the post 9-11 period, there was an idea
budding in his mind, “…that somehow through our training and races, the
heroes protecting our freedom could benefit from our work.”  In March 2007, Paul was searching for a
crank-wheelchair-friendly race.  He
learned about the Run For The Warriors® at Camp Lejeune.  He sent the information to Sally in an email,
“Here’s our cause!”
“Run For
The Warriors® convinced me we were on the right path,” asserts Paul.
Not only was
it the first time he raced with other crank-wheelchair athletes, but he raced
side-by-side with the wounded Marines.
“Folks came up to me afterwards to thank me for my service.  They assumed I was a veteran too,” Paul
recalls.  “I’m not a warrior.  I’m just a grateful beneficiary of the
sacrifices of those brave professionals,” he corrected them.  “But it demonstrated to me the depth of
the sense of gratitude that exists for our wounded service members.”
Later that
year, reality concerning the Marine Corps Marathon began to sink in.  Paul gathered information about the course
and learned how steep some of the hills were that he would face.  “I thought I could just change to lower
gears on my crank-chair.  When I learned
how steep some of the hills are, I realized I was going to have to get
stronger; a lot stronger.  They don’t
make gears that low.”  Paul decided
to extend his Marine Corps Marathon training until 2008.
The extra
year gave the couple time to act on another source of inspiration:  fundraising for Hope For The Warriors®.  They established a fundraising campaign they
called 2008 Miles of Hope and promised
to raise $26,200 for Hope For The Warriors®; $1,000 for each mile in a
marathon.  To get there, Paul also
pledged to crank his wheelchair 2008 miles in training, races, and fundraising
events. 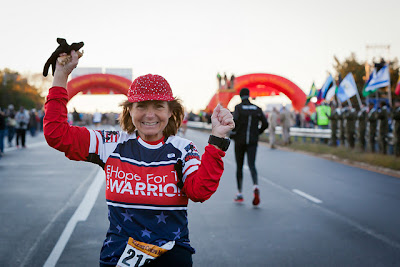 A Torch of
Hope

For her part,
Sally also became an active volunteer with Hope For The Warriors®.  Through her affiliation with her service
sorority, Beta Sigma Phi International, she began to spread the word about Hope
For The Warriors® work.  In the annual
convention of chapters from the two Carolinas, she shared stories of the
wounded service members and their families assisted by Hope For The Warriors®.  “We live in two of the most
military-friendly states in the country.
These brave men and women are our neighbors.  They are our friends.  All too often, they are our
family.”  Indeed, as the word spread
through the sorority about Hope For The Warriors®, other sisters began to
relate stories of their loved ones wounded in combat.  Sally led efforts to establish Hope For The
Warriors® as the beneficiary of service projects by chapters throughout the two
states in a campaign she calls Carolinas’ Torch of Hope.
Between the
efforts of the husband and wife team, donations began trickling in to Hope For
The Warriors®.  Sally and her sorority
sisters held pancake breakfasts at Applebee’s and sold ticket for Belk’s
Charity Day events.
Paul and
Sally wrote letters to friends, relatives, and businesses asking for
donations.  “I was overwhelmed and
inspired at the outpouring of generosity we encountered,” Paul explained. 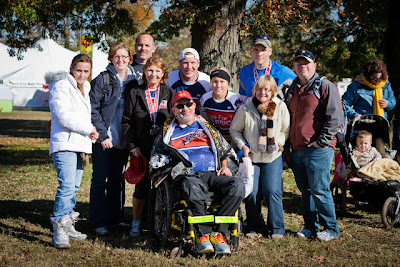 Another thing
started happening among friends and family members.  The “running bug” seemed to start
to spread.  Other relatives were starting
to enjoy the fun we were having in 5Ks, 10Ks, and half marathons.  And so were co-workers and friends.  Sally started running in 5Ks and 10Ks, often
placing or winning her age bracket.  She
began training to run the Rock ‘n’ Roll Half Marathon in Virginia Beach.  The inspiration had reached a full epidemic.
In October
2008, Paul crossed the starting line of the Marine Corps Marathon, confident of
his finish.  At mile one, he looked up
the hill toward the intersection where he had sat two years prior and said to
himself, ” I KNOW I can do this!”
More than five hours later he came to the steepest hill in the race, the
hill runners call “Iwo” at the Marine Corps War Memorial.  It took him twenty minutes to ascend the hill
in an effort so difficult for him that many finish line spectators cheered
through the tears in their eyes.
While many
would consider a feat such as the Marine Corps Marathon a lifetime achievement,
the Kellys were just getting started.
Paul returned each year since, completing the event in ’09, ’10, and
2012 and completing the New York City Marathon three years in a row.  Sally continued her training and ran the
Marine Corps Marathon in 2011.  Before
Paul retired from work in December 2011, the couple organized a team of
coworkers to run the Marine Corps Marathon in 2010 and 2011.  They also rallied coworkers to run the Run
For The Warriors® each year.
To date the
Kellys have raised more than $54,000 in donations to Hope For The Warriors®.  They haven’t slowed down with their
activities, either.  In February, Paul
completed the Myrtle Beach Marathon, number 61 on his list of marathon and half
marathons.  He describes his inspiration,
“The men and women that benefit are deserving heroes.  What’s more, over the years, we have grown
strong, lasting friendships with many of them.”
Look for the
couple at the Marine Corps Marathon again this year.  And the Air Force Marathon, the Detroit
Marathon, and the Canton, OH, Marathon.
But before all that, look for them right here in Jacksonville, NC, at
the event that inspired them both; the Run For The Warriors®.
Register for the Run For The Warriors®
Join Team Hope For The Warriors®
Donate Today in honor of Paul and Sally Kelly
Facebook0Tweet0LinkedIn0Print0Email0