I Race Because I Can 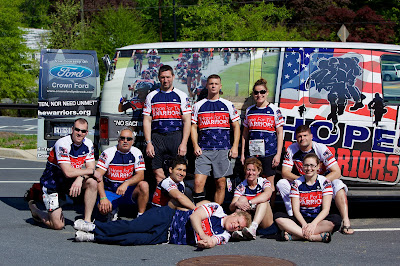 Hope For The Warriors® was started by a race. A group of Marine Corps wives searched for a way to honor wounded service members and hopefully raise funds too.  Many of them were runners and so they decided to hold a 5K run.  The first Run For The Warriors® was held on Flag Day in May 2006 and this program has expanded and spread across the country.

Later, an athletic team was added to our programs.  Team Hope For The Warriors® is comprised of both warriors–some on adaptive equipment–and community Team members who raise funds on their behalf.

Running is an important part of who we are as an organization. 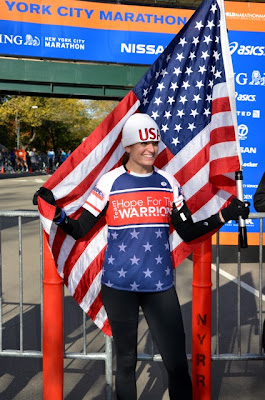 Our Team shirt (seen in the above photo) celebrates our country.  Our Team shirt can be seen in races across the country.  The Marine Corps Marathon, New York, Chicago, Houston, San Francisco, San Diego and more.  And that Team shirt was also on the streets of Boston.  We do not have charity bibs for the Boston Marathon, but we had Team members who proudly wore that Team jersey to run the marathon on behalf of Hope For The Warriors and the miliary families we assist.  We are grateful to share that they are safe. 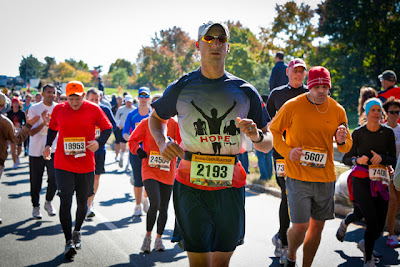 The single word “HOPE” cuts acros the top with outlines of runners and cyclists.  But the back of the shirt shared more.

These four lines are to show support to wounded service members.  It is to show why we run when there are others who no longer can.  More than ever, the first two lines resonate with me.  Our Team members, supporters, volunteers and staff members race.  And we do so proudly knowing that we do not just run for ourselves.  We run to raise funds for military families and in honor of those wounded and fallen service members.

And what happened in Boston changes none of this.  Our Team, our Team members, and our staff will not stop.

“I Race because I can; That’s my right as an American.”

We will continue to run with hope and courage.

Our thoughts and prayers are with the runners and their families in Boston.