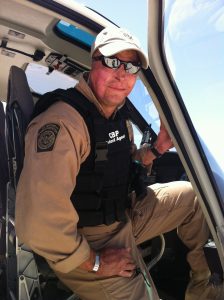 Retired U.S. Marine Captain Ryan Voltin always had a passion for serving our country, which motivated him to continue that service even in the face of adversity.

In January 2007, Voltin, a commissioned officer and pilot in the AH-1W Cobra attack helicopter, deployed with the 26th Marine Expeditionary Unit in support of Operation Iraqi Freedom. On May 25, 2007, while conducting a series of live fire combat training exercises in Jordan, Voltin’s aircraft was directly hit by friendly fire while sitting on the ground. He sustained severe third degree burns to his arms, hands, head, and face, as well as multiple fractures to his left hand, and the amputation of his left leg below the knee. These injuries led to three years of medical care at Brooke Army Medical Center (BAMC) in San Antonio. Despite having over 50 surgeries throughout his recovery period, Ryan maintained a positive outlook and had the support of his wife and children to help him get through.

After his time at BAMC, Voltin was medically retired from the Marines in 2010 and moved to San Diego with his family. His dream was to return to flying and serving his country, and it was at this time his wife, Pam, reached out to Hope For The Warriors to see if Ryan’s wish could be granted. The end goal was to help Ryan get a job flying with US Customs and Border Protection, a job they had both read about.

“When I read the description, I saw Ryan in that job. I couldn’t not let him be himself. This was who he was.”

Hope For The Warriors granted Pam’s Wish for Ryan through the organization’s Warrior’s Wish program. After a year of flight training and another year of interviews and testing, Ryan was hired. Today, Voltin flies helicopters and airplanes, supporting land and sea operations dedicated to border security. He has served the Department of Homeland Security in southern New Mexico and Puerto Rico. He still currently resides in the San Diego area, with his wife, Pam, and their four children, Jaida, Maya, Noah, and Hope.

When asked about his experience with HOPE, Voltin shares, “Hope For The Warriors invested in my future, and their support is a big part of the success that my family and I have had in this next chapter of our lives. I just hope I can live up to the love and commitment they’ve given me.” We are grateful to have been a part of Ryan’s post-recovery journey and to have helped him share HOPE through his passion for flying and serving.