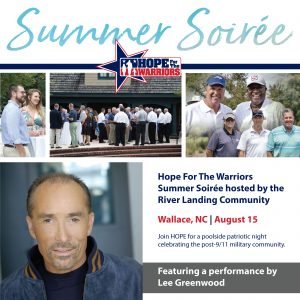 JACKSONVILLE, N.C. (July 27, 2021) –Tickets are now available for the Hope For The Warriors Summer Soirée presented by Siemens Government Technologies, scheduled for Sunday, August 15 at River Landing Country Club in Wallace, N.C. The poolside event kicks off at 6 p.m. and will feature a performance by Lee Greenwood who will sing “God Bless the U.S.A.”

In addition, the Summer Soirée will honor members of our nation’s armed forces and their families with the Vigiano Hope & Courage Awards, named in honor of the Vigiano family, who lost both of their sons in the September 11th attacks. Hope For The Warriors will also honor individuals, corporations and organizations who have stood beside the organization in serving military families.

Tickets are $250 and include heavy hors d’oeuvres, drinks and entertainment by Greenwood and the Mango Band. Tickets need to be pre-purchased.

Founded aboard Camp Lejeune in 2006, Hope For The Warriors assists veterans, service members and military families with a variety of programming including clinical health and wellness, sports and recreation and transition services.

This year the multi-day event features a community block party at the Mad Boar, par three challenge, golf tournament and new this year, the Summer Soirée and ZSA Shooting Event at Flatwoods Outfitters. The Celebrity Invitational is hosted by World Series champions Johnny Bench and Doug Flynn with the continued support of the River Landing community and its residents.

“It’s exciting to be back at River Landing with our hosts Johnny Bench and Doug Flynn,” said Robin Kelleher, co-founder, president/CEO of Hope For The Warriors. “Despite working through a pandemic, we found many ways to safely gather again thanks to the support of the Murphy Family and the River Landing community.

“Adding the Summer Soirée is an example of just that. This outside event is a great time for folks to join us in honoring our Hope & Courage Award winners, listening to a performance by Lee Greenwood and enjoying the great food and scenery at River Landing.”

“From the beginning, we knew the importance of supporting our servicemen and women who have given their all so we can enjoy the many freedoms in our country,” said Wendy Murphy chair of the River Landing Invitational. Being involved with Hope For The Warriors has truly been rewarding, not just for us, but our entire River Landing community. Dell and I look forward to August each year when Hope For The Warriors returns and the River Landing community turns out in support, either volunteering their time or participating in the Invitational. The River Landing employee family works tirelessly throughout the year and have embraced the success of the organization as much as we have.”

With the continued support of the Murphy family and the River Landing community, the Hope For The Warriors Invitational has raised over $1.5 million since 2010.

To purchase tickets for the Summer Soirée or for more information on the 12th Annual Hope For The Warriors Celebrity Invitational, visit hopeforthewarriors.org.

About Hope For The Warriors: Founded in 2006, Hope For The Warriors is a national nonprofit dedicated to restoring a sense of self, family and hope for post-9/11 veterans, service members and military families. Since its inception, Hope For The Warriors has served over 36,000 through a variety of support programs focused on clinical health and wellness, sports and recreation and transition. One of the nonprofit’s first programs, Military Spouse and Caregiver Scholarships, has awarded over 155 scholarships to caregivers and families of the fallen. For more information, visit hopeforthewarriors.org, Facebook, Twitter or Instagram.