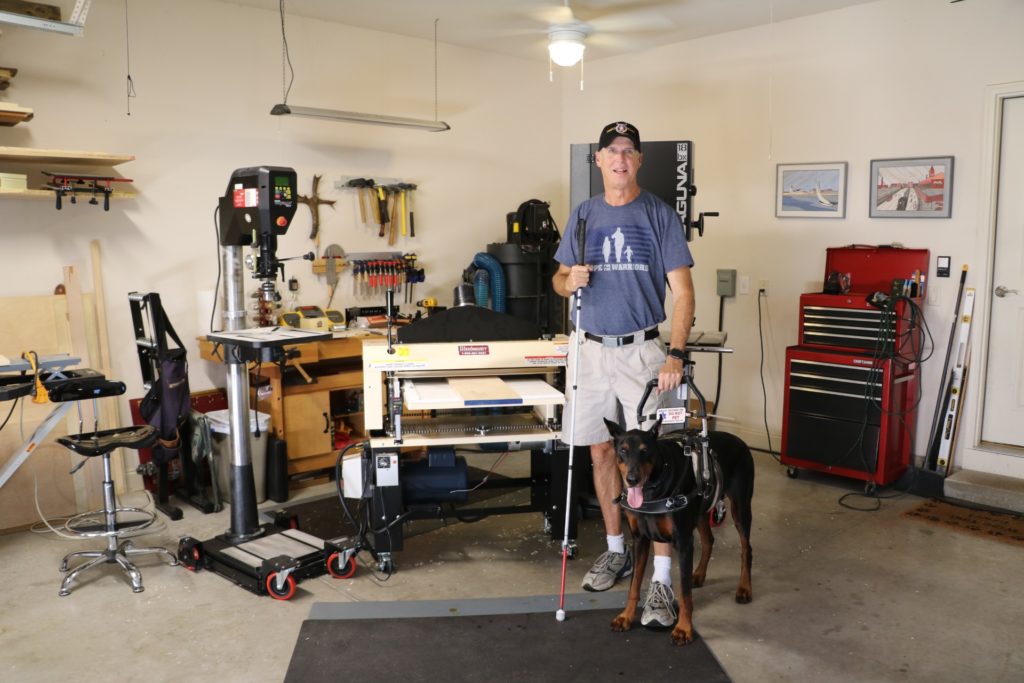 As a child growing up in Anaheim, California, Franklin would spend time with his grandfather in his wood shop. As a young adult, he turned his hobby into a career as a cabinet maker and took his carpentry skills with him to the Army, even while deployed to the Middle East where supplies were limited.

“While deployed in support of Operation Iraqi Freedom and the U.S. Army Rangers in Afghanistan, I found a crate that was used for a machine gun mount for a HUMMV. I used it to make a podium for the chapel,” said Franklin. “I have a problem in that sometimes when I build projects, I tend to build them to my dimensions and I am 6 feet, 7 inches tall. When I went to service on Sunday, I had to watch our Ranger Pastor deliver the Sunday sermon from his tiptoes. So, I decided to take the podium apart and cut it down four inches; he really liked the finished product.

“I like to think that I was able to take wood that was meant for war and turn it into something that would lift my fellow soldiers’ spirits in time of war,” he added.

Now, thanks to Hope For The Warriors® and its Warrior’s Wish® program, Franklin is expanding his wood shop with $10,000 worth of supplies including a planer, drill press, bandsaw and more.

Hope For The Warriors is a national nonprofit dedicated to restoring a sense of self, family and hope to service members, their families, and families of the fallen. One if its first established programs, Warrior’s Wish, honors the goals and desires of severely wounded service members, veterans and their families.

“I started doing this as a child,” said Franklin. “It’s been a lifelong aspiration to obtain equipment like this. Having my wish granted from Hope For The Warriors will open up a world of possibilities for me.

“I used to drive a motorcycle to feel like I was in tune with myself. Now, woodworking does that for me. It makes me feel alive and normal again.”

On July 23, 2007, his team was working out of an Iraqi police station 19 miles north of Bagdad. Franklin was in a small room with a window on the outer wall of the building, preparing to bed down for the night when two large mortar shells came in and exploded within 15 feet of where he was standing. He sustained a severe traumatic brain injury, which has left him legally blind with balance and mobility deficiencies, motor apraxia, verbal apraxia and chronic severe headaches.

After 25 years serving in the U.S. military, and spending two and a half years in hospitals, Franklin, medically retired in February 2011.

“Military members with stories like Army Sergeant First Class Franklin is the reason we started the A Warrior’s Wish program,” said Robin Kelleher, president and CEO of Hope For The Warriors. “Medically retiring from the military is not an easy transition. Military members and their families spend months/years away from their homes recovering from injuries. When they finally return home, providing an outlet for expression and solitude is critical.

“We’re extremely honored to gift Sergeant First Class Franklin with this woodworking equipment so he can continue to thrive and flourish in his retirement.”

Today, Franklin likes to build furniture and other small woodworking pieces for friends and family, and hopes to build up enough inventory to sell at local craft fairs.

“Last summer and with the help from my youngest daughter, Allegra, I was able to tackle my biggest project so far, making her a seven-foot by four-foot bookcase,” said Franklin.

In 2019, 15 wishes will be granted through Hope For The Warriors. The wishes fulfill a desire for a better quality of life or support a quest for gratifying endeavors for those who have sustained severe physical and psychological wounds in the line of duty. Since the program’s inception, Warrior’s Wish has granted over 200 wishes.

For sponsorship opportunities for the Warrior’s Wish program, contact Chrystal Keilers at ckeilers@hopeforthewarriors.org or (832) 776-9379.

To apply for a wish, visit hopeforthewarriors.org and apply for services.

Founded in 2006, Hope For The Warriors is a national nonprofit dedicated to restoring a sense of self, family and hope for post 9/11 veterans, service members and military families. Since its inception, Hope For The Warriors has served over 23,200 through a variety of support programs focused on clinical health and wellness, sports and recreation and transition. One of the nonprofit’s first programs, Military Spouse and Caregiver Scholarships, has awarded over 135 scholarships to caregivers and families of the fallen. In addition, Run For The Warriors has captured the hearts of over 25,500 since 2010. For more information, visit hopeforthewarriors.org, Facebook,Twitter or Instagram.