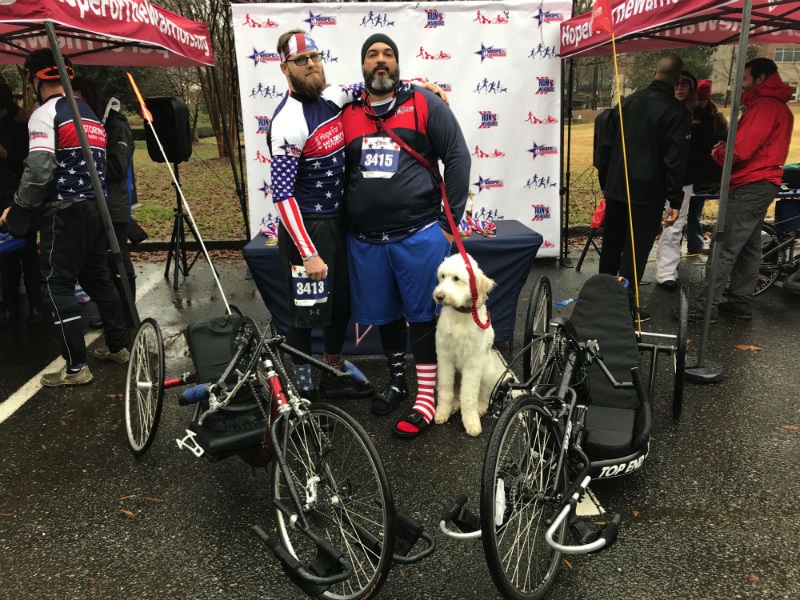 A program of Hope For The Warriors, Team Hope For The Warriors provides athletes of all abilities the opportunity to engage the competitive spirit at endurance events. Warrior Team members are provided adaptive equipment and race support to ensure that they are defined by their achievements rather than by their injuries.

Green served 12 years before retiring due to injuries sustained while deployed. He discovered adaptive sports while recovering and serving through the Army Warrior Transition Battalion at Fort Bragg in North Carolina but lost access to handcycles when he retired until he was introduced to Hope For The Warriors.

“Handcycling became as much an integral part of my recovery, as anything my doctors required of me,” said Green. “The activity that is handcycling took my recovery from the physical level to an emotional and spiritual level. When I retired from the Army and lost access to the adaptive equipment, it was like taking a step backwards; which sucks when taking a step forward isn’t easy to begin with.

“I was sitting at home backsliding into depression; I lost all my drive. Once I started riding again on the loaner bike from Hope For The Warriors I felt a sense of purpose. Now, knowing that I have my very own handcycle thanks to Hope For The Warriors, I won’t ever have to worry about the possibility of regressing. I have had a complete change of quality of life since getting to be back on three wheels,” he added.

Originally from Puerto Rico, Quinones retired from the Marine Corps after 13 years of service. Due to back and groin injuries, he recently discovered Team Hope For The Warriors and handcycling to maintain a healthy lifestyle and help relieve stress in his civilian life. Motivated by family and friends, Quinones hopes to one day participate in the Marine Corps and Boston Marathons on behalf of Team Hope For The Warriors with his newly donated handcycle.

Quinones shared what being a member of Team Hope For The Warriors means to him.

“It’s amazing to be able to spend time with other military members,” said Quinones. “Once you leave the military you miss the camaraderie between service members. Since becoming a member of Team Hope For The Warriors I’ve been able to be myself again and meet with others that are as weird as me!”

A national nonprofit Hope For The Warriors, assists veterans, service members and military families with a variety of programming including clinical health and wellness, sports and recreation and transition services.

Founded in 2006, Hope For The Warriors is a national nonprofit dedicated to restoring a sense of self, family and hope for post 9/11 veterans, service members and military families. Since its inception, Hope For The Warriors has served more than 19,000 through a variety of support programs focused on clinical health and wellness, sports and recreation and transition. The nonprofit’s first program, A Warrior’s Wish, has granted 200 wishes to fulfill a desire for a better quality of life or support a quest for gratifying endeavors. In addition, Run For The Warriors has captured the hearts of more than 23,500 since 2010. For more information, visit hopeforthewarriors.org, Facebook, Twitter or Instagram.