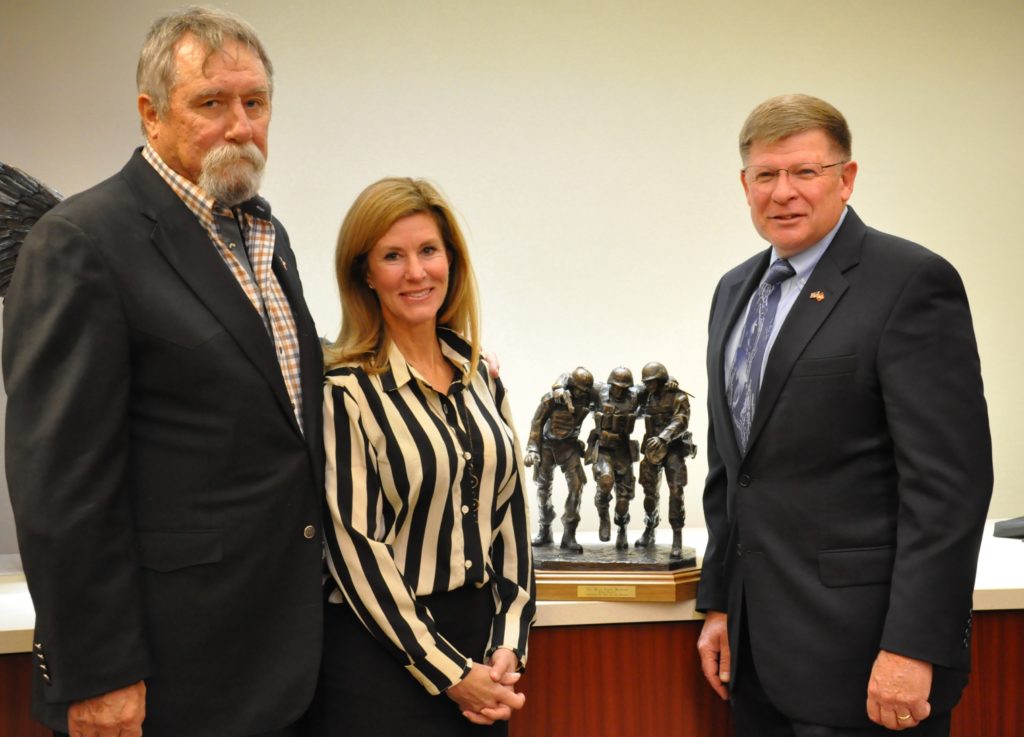 SPRINGFIELD, Va. – Today,  Hope For The Warriors commemorated the 15th anniversary of the Second Battle of Fallujah by donating a replica of the “No Man Left Behind” monument to the National Museum of the Marine Corps.

Hope For The Warriors is a national nonprofit which assists veterans, service members and military families with a variety of programming including clinical health and wellness, sports and recreation and transition services.

The 16-inch-tall bronze statue is a scaled-down replica of the “No Man Left Behind” monuments that Hope For The Warriors donated to the Marine Corps, with one placed aboard Camp Lejeune in 2013 and the second to Camp Pendleton in 2014.

“The Hell House photo of three Marines, two laying down their weapons under fire to care for their brother, is an iconic image,” said Robin Kelleher, co-founder and president of Hope For The Warriors. “It represents the best of our Marines and service members. The No Man Left Behind monument is inspired from this image and it stands as a symbol of strength, courage and brotherhood at both Camp Lejeune and Pendleton.”

“As the Marine Corps continues to complete the final galleries of the National Museum of the Marine Corps, this statue will represent the latest generation of Marines who share the long legacy of all who served before them – their honor, courage, commitment, selfless service and sacrifice” said retired U.S. Marine Corps Major General James A. Kessler president and CEO of the Marine Corps Heritage Foundation.

Standing in front of the Warrior Hope and Care Centers at Camp Lejeune and Camp Pendleton, the “No Man Left Behind” monuments are to honor those wounded and injured in the line of duty and those who never returned home. It represents the ultimate price of battle and the unyielding spirit of brotherhood and dedication known by service members and their families.

About Hope For The Warriors:  Founded in 2006, Hope For The Warriors is a national nonprofit dedicated to restoring a sense of self, family and hope for post-9/11 veterans, service members and military families. Since its inception, Hope For The Warriors has served over 30,000 through a variety of support programs focused on clinical health and wellness, sports and recreation and transition. One of the nonprofit’s first programs, Military Spouse and Caregiver Scholarships, has awarded over 135 scholarships to caregivers and families of the fallen. In addition, Run For The Warriors has captured the hearts of over 25,500 since 2010. For more information, visit hopeforthewarriors.org, Facebook, Twitter or Instagram.