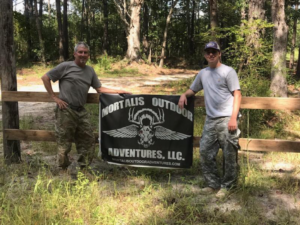 Consider it “mission accomplished” after the veteran owned company hosted its first veteran hunt through a partnership with Hope For The Warriors and its Outdoor Adventures Program recently.

And what a hunt it was for retired U.S. Army Lt. Col. Marty Reigher and his 17-year-old son Lee. With Kuperus as their guide, Reigher and his son bagged four feral hogs over two days of hunting just on the border of coastal North and South Carolina.

Calling the hunt “indescribable,” Reigher said it offered an opportunity to make up for so much time away from home during his career.

“I missed a lot of time with my family and especially my young son with deployments while he was seven to 12 years old,” Reigher said, who medically retired from the U.S. Army after 32 years of service. “I’m trying to get some of it back before he heads off to college next year.”

It was an amazing two days for Reigher and his son.

“We had a great time and lots of one-on-one time to talk about college and careers,” said Reigher. “It was only his second time hunting. I took him deer hunting when he was 10, seven years ago just prior to my last deployment. He shot a deer so now he thinks hunting with me is automatic.”

It certainly seemed that way during the two-day hunt with Mortalis Outdoor Adventures. The father-son duo bagged four hogs, with the younger Reigher dropping the largest, a 350-pound razorback.

The Reighers’ experience was exactly what Kuperus and Austin had hoped for when they founded Mortalis Outdoor Adventures. The pair met in 2006 while serving in the same platoon at the 2nd Recon Battalion and served together for many years after. They soon discovered they shared a love of hunting.

Austin medically retired after losing both legs to an IED in Afghanistan in 2009, and Kuperus medically retired in 2017 as a result of injuries sustained in combat and training. It wasn’t long after Kuperus’ retirement that the pair began putting together plans for Mortalis.

“Our passion for hunting is why we started this business, and we want to spread that to our clients and show them the relaxation and healing that occurs in the outdoors whether you harvest an animal or not,” said Kuperus.

The Reighers’ hunt was the first Hope For The Warriors trip hosted by Mortalis and it certainly seems they achieved their goal.

“Having Marty and his son was an absolute pleasure as well as an honor as well as to have a fellow wounded warrior come hunt with us at Mortalis Outdoor Adventures,” said Kuperus. “We loved seeing the interaction between Marty and his son and believe that their bond is now strengthened due to their trip together.

“I swear they heard Marty yell in Myrtle Beach when he saw the hog his son shot. Hanging out with them, getting to know them and swapping stories, I believe had a healing power for them as well as us. They came as clients and fellow veterans but left as family.”

Founded in 2006, Hope For The Warriors is a national nonprofit dedicated to restoring a sense of self, family and hope for post 9/11 veterans, service members and military families.

Hope For The Warriors created the Outdoor Adventures Program in 2010 to provide adaptive opportunities for wounded heroes to participate in sporting activities in the great outdoors. In 2012, the organization recognized the therapeutic benefits for family members and expanded the program to include spouses and children of wounded and fallen service members.

Founded in 2006, Hope For The Warriors is a national nonprofit dedicated to restoring a sense of self, family and hope for post 9/11 veterans, service members and military families. Since its inception, Hope For The Warriors has served more than 23,200 through a variety of support programs focused on clinical health and wellness, sports and recreation and transition. One of the nonprofit’s first programs, Warrior’s Wish, has granted 200 wishes to fulfill a desire for a better quality of life or support a quest for gratifying endeavors. In addition, Run For The Warriors has captured the hearts of more than 25,500 since 2010. For more information, visit hopeforthewarriors.org, Facebook, Twitter or Instagram.