Honoring Those That Serve 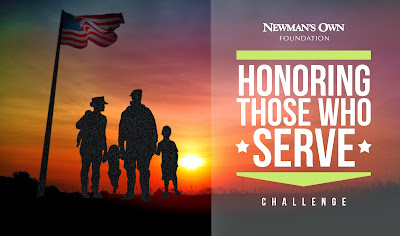 Hope For The Warriors® was
recently chosen by Newman’s Own Foundation to participate in their first
ever Crowdrise Challenge:  Honoring Those Who Serve
Challenge. Our goal is to raise $75,000 for service members and
their families and we can only do it with your help. Whichever nonprofit
receives the most donations will also receive an additional $75,000 from
Newman’s Own Foundation.
An additional $75,000 from Newman’s
Foundation could fund three additional Above & Beyond Seminars, directly supporting
more than 75 post-9/11 combat service members and their families as they
transition into new civilian careers.
Newman’s Own Foundation is an
independent, private foundation that was formed in 2005 by Paul Newman to
sustain the legacy of his philanthropic work. The foundation has supported Hope
For The Warriors® for several years and this year, focused on supporting
our Above & Beyond Program; through their grant, Hope For The Warriors®
was able to conduct Above & Beyond Seminars across the country, connecting
service members with human resource management experts.
As an important supporter to Hope For
The Warriors® and to our military families we ask that you share this through
your own networks.  That could include social media, emails, and more. The
Crowdrise challenge began on September 30 so please visit our page today: http://www.crowdrise.com/HopefortheWarriors-NOF.
For every dollar donated, you will bring Hope For The Warriors® closer to
earning that additional $75,000 from Newman’s Own.
FacebookTweetLinkedInPrintEmail