No city or town wants to be home of a fallen service member.  Sadly, the people of Kingwood, TX understand
this pain all too well.  They have lost
three young men, each who graduated from Kingwood High School.  Each man had spent many years, some their
entire lives, in the Houston area before answering the call to serve in the
military.

A group in Kingwood created a golf tournament with the goal
to honor these three fallen heroes.  They
also chose to raise funds for two nonprofits, Hope For The Warriors® and the
Blue Star Mothers of America. 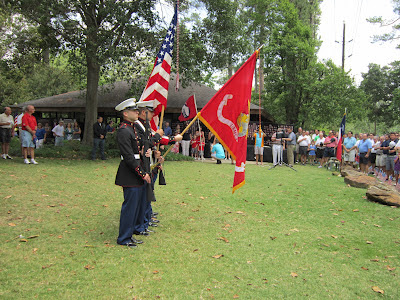 In April, the group held the First Annual Kingwood Fallen
Heroes Memorial Golf Tournament.  The day
was a beautiful tribute to the sacrifices of these young Kingwood men.  Community leaders, local business owners,
corporations, and residents provided overwhelming support.  The event was inspiring, heartbreaking and
meaningful for all that attended. 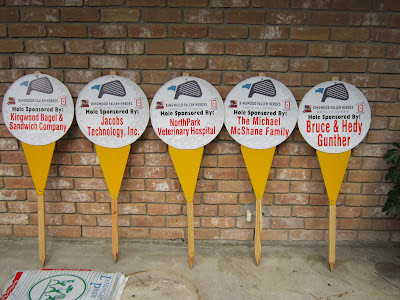 The day began with the JROTC Marine Color Guard from nearby
Atascocita High School presenting the colors.
After the pledge of allegiance, Kingwood Resident, Jim Hicks, sung “God
Bless America.”  The tournament was
attended by 175 golfers who enjoyed a wonderful day of golf.  Afterwards, the guest speaker for the dinner featured was Ted Poe,
U.S. Congressman from the 2nd District of Texas. 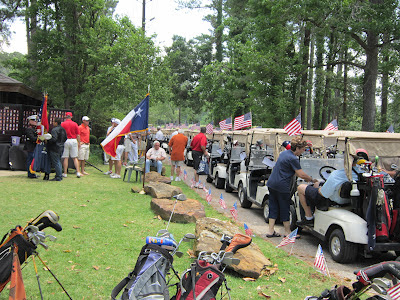 We thank the community of Kingwood, Texas for including Hope
For The Warriors® in this tournament and allowing us to honor these three
fallen heroes. 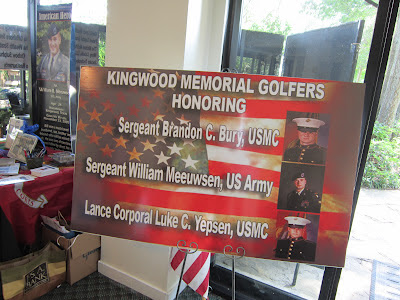 Brandon was born in Houston in 1984 and lived most of his
life in Kingwood. He graduated from Kingwood High School in 2002 and furthered
his education in Austin, Texas before joining the United States Marine Corps in
2004. He died June 6, 2010 while on patrol in Southern Afghanistan. Brandon was
survived by his wife, Heather, two young sons, Cole and Cade, his parents, two
brothers, and numerous other loving family members and many friends. He was a
larger than life figure with a stature (6’ 6”) that matched his big personality
and big heart.

Bill was born in Mount Vernon, Washington in 1981 and later
moved to Kingwood. He graduated from Kingwood High School in 1999 and attended
Texas A&M University before joining the Army in 2002. He died November 23,
2005 when his unit came under direct fire during combat operations near Baghdad,
Iraq. Bill was survived by his wife, Lauren, his parents, one sister, and
numerous other loving family members and friends. Bill was a caring man with a
warm smile and a compassionate heart for people and animals. He was loved and
respected by his family and friends and is missed greatly by all.

Lance Cpl. Luke Yepsen, USMC, KIA
Luke was born in Houston, Texas in 1986. He graduated from
Kingwood High School in 2004 and attended Texas A&M University before
joining the Marine Corps in 2005. He died December 14, 2006 while conducting combat
operations in the Al Anbar Province of Iraq. Luke was survived by his parents, one
brother, numerous other loving family members and friends, and his fiancée,
Sandra. He was a patriotic young man with a strong faith in God and the desire to
serve his country and protect others. Luke loved all people and was proud to
have traveled to 20 different countries in his 20 brief years.
Facebook0Tweet0LinkedIn0Print0Email0