It is our honor to present a 2019 Vigiano Family Hope & Courage Award to a man who has been instrumental in the effort to provide for servicemembers, veterans, military families and families of the Fallen, Colonel David Sutherland. David is the Chairman of the Center for Military and Veterans Community Services (Dixon Center) and actively contributes to numerous national veteran and military family committees and boards. He speaks in communities at universities, businesses and conferences around the country as a vocal advocate and leader for transformational change. David culminated his 29 years of service following Brigade Command, as the Special Assistant to the Chairman of the Joint Chiefs of Staff with principle focus on Warrior and Family Support. By visiting hundreds of communities and assisting thousands of organizations, he created a nationwide network of support utilizing grassroots solutions for veterans and their families. Thank you, Colonel David Sutherland, for your work on behalf of the warrior community! 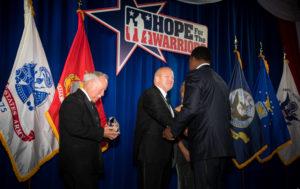 Colonel David Sutherland is rarely at a loss for the right words or actions. That quality is hardly surprising in a man selected to lead thousands of servicemembers in one of the most challenging provinces of Iraq at the height of the insurgency there. However, Sutherland notes that he has been “speechless four or five times” in his life; one of them on discovering that he would be a 2019 Vigiano Family Hope & Courage Award honoree.

Characteristic of David, he is proud to accept the award as a means of highlighting his team, showcasing the achievements of everyone around him, and highlighting John Vigiano Sr.’s legacy. Asked about that legacy, David again grows uncharacteristically quiet. It’s a heavy silence, one that heralds intense thought. When he speaks again, there is deep sincerity when he says, “It is everlasting. Like all generations of people who serve, there are those who leave an everlasting impression… His is a limited edition amongst them. His family’s sacrifice is a living legacy to those who come behind him.” If anyone has what it takes to pick up and carry the torch lit by John Vigiano Sr., it is David Sutherland.

In retiring from the US Army and founding the Dixon Center for Military and Veterans Services, named not simply for Staff Sergeant Donnie D. Dixon but because of the way he represented everything good about the military, David simply “went from one life calling to another.” His new calling allows him to support the Soldiers, Sailors, Airmen, Marines and Coast Guard personnel he so clearly loves by “advising, consulting and building capacity” amongst “people across the nation [who] want to help, but just don’t know how; by leveraging existing programs for more impact.” Now he leads a full-time staff of 12, with 250 partnered supporters working with over 30,000 likeminded organizations and people to serve veterans and their families where they live. That all began during his final years in the Army.

While working for the Chairman of the Joint Chiefs of Staff, David received an email from a “force of nature named Robin Kelleher.” After meeting her, he realized they have the same passions and interests and were both “in love with the problems they’re trying to solve.” Moreover, he says, “Robin and Hope For The Warriors have always got my back.” Since that meeting, David notes Hope For The Warriors’ growth and evolution from a boutique, niche organization to one of both national reach and local impact. That local impact is what makes Hope For The Warriors and David such a formidable team in advocating for and mentoring grassroots organizations on behalf of “2.3 million men and women, the 1% brave enough to put on the uniform.” It’s a partnership that brings hope and dignity to veterans suffering in “isolation and humiliation.”

David says the direction his life has taken has “God’s fingerprints all over it.” The countless service members whom he has helped “succeed where they work, live and play” would surely agree.