Last Saturday, the Bear Lakes Country Club in West Palm Beach, Florida held a golf tournament to raise funds for Hope For The Warriors®.  It was an extremely successful event that raised more than $33,000 for our organization.

Our Florida Project Coordinator, Mirka, attended with two combat wounded veterans, Keith Bisig and Bobby Joseph.  They had a great time, met so many wonderful people and had a great day of golf.

When Mirka recapped her day for me, she shared the greatest highlight of the event.  In the morning, she was given the opportunity to speak to the group and talk about Hope For The Warriors®.  At one point in her speech, she addressed the other veterans in the group, specifically veterans from the Vietnam War.  She thanked them for their service and promised that today’s veterans will never be treated in the same manner.

Throughout the day, Mirka was approached by so many veterans, many who had fought in Vietnam.  They were honored by her words and the recognition she gave them.  And Mirka was overwhelmed by their gratitude towards her and Hope For The Warriors®.  She admitted that it had been a very emotional day for her–completely due to the generosity of the club members.

Hope For The Warriors® thanks the members of the Bear Lakes Country Club.  Thank you for joining us in our mission! 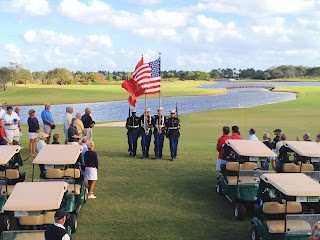